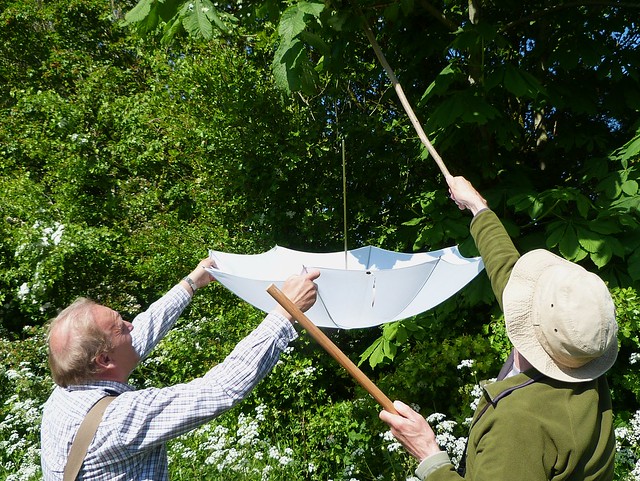 Fifteen Members made an early start at Elm Farm to open a moth trap put out the night before by Philippa and John Paget.

Despite being what should have been a pretty good night the moth numbers were unusually low for the time of year, with just thirty two individuals of nine species, although twenty-one male Muslin moths did make quite a spectacle when all placed on one egg carton before being released.

We were, however, rewarded with the beautiful and unusual little moth known as the Chinese Character, a very fresh and wonderfully marked Brindled Beauty as well as the aptly named Spectacle which sports what looks like a pair of spectacles or goggles on its thorax when viewed from the front. Also in the trap were Common Swift, Pale Pinion, Rustic Shoulder-knot, Flame Shoulder and Shuttle-shaped Dart. There were no micro moths in the trap but Philippa did produce an old peanut feeder which was 'infested' with pupal remains together with two adult micro moths which were later confirmed to the Cork Moth (Nemapogon cloacella) a very small moth belonging to the Tineidae family. 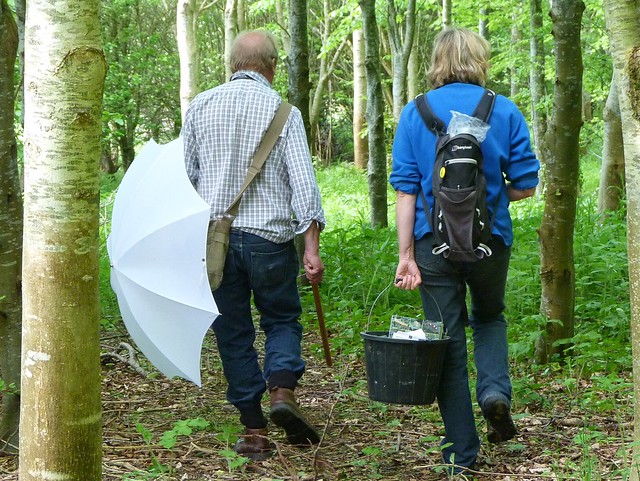 The original plan for the rest of the field trip was to search for Leaf Miners, but it was considered too early in the year for this to be very successful, although later in the morning we did find a couple of leaf mines on Hogweed growing in the woodland area which was later identified as a Diptera (fly) species called Phytomyza spondylii..  To compensate for this I brought along some photographs, both of adult leaf miners and the leaves they came from showing their typical 'mine' patterns. Also included were a couple of live specimens of Phyllonorycter harrisella and P. messaniella to illustrate their minute size of just 3 or 4mm long.

Next, we set off in glorious sunshine to search along the hedgerows and track verges further away from the farmyard for whatever 'wildlife' we might find. Armed with a stout stick and an upturned white umbrella a couple of us 'beat' the branches of overhanging trees and shrubs in search of caterpillars and any other invertebrates, whilst others either searched the lower vegetation or just enjoyed the Butterflies and Damselflies flitting up and down the hedgerow, stopping now and again to bask in the warm sunshine.  These beautiful insects included both male and female butterflies of the Orange-tip, Brimstone, Green-veined White, Peacock, Comma and Speckled Wood along with the Common Blue Damselfly, Large Red Damselfly and the Beautiful Demoiselle. Later on a single Small Copper butterfly was seen in a recently cultivated field stopping now and then to bask momentarily on the warm stones that littered the surface. 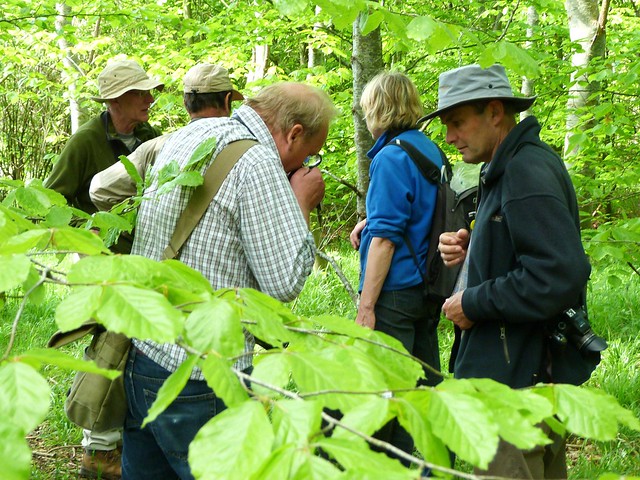 It wasn't long before we had a number of caterpillars belonging to the Geometridae family of moths often referred to as 'loopers' or 'inchworms' after their mode of movement. After ‘beating’ a Silver Birch I was very excited to find what I first thought were two ‘Bagworms’ the larvae of a particular micro moth that creates a portable ‘case’ out of living or dead plant material to provide it with protection and camaflauge. However, after further research they proved to be another form of ‘case’-bearing moth larvae belonging to the Coleophoridae family called Coleophora serratella which also uses plant material to make a portable case.Also found by 'beating' were quite a few species of spiders including to or three different species of Crab Spider, a number of small bright green Weevils, Click Beetles, Scarlet Lily Beetle, Hawthorn Shield Bugs, Black and Red Frog-hoppers (Cercopis vulnerata) and numerous other invertebrates we were unable to identify beyond their family.

A number of accidentally disturbed or true day flying moths were also seen. Silver Ground Carpet, Burnet Companion, Mother Shipton, Angle Shades and micro moths such as the Nettle-tap, the tiny Cocksfoot Moth (Glyphipterix simpliciella), Elachista argentella and much to my delight, Phyllonorycter lantanella. Other invertebrates encountered on the walk included a number of species of hoverflies such as the Drone Fly and the Leucozona species, blue and green Lacewings, Harvestmen, Scorpion flies, Ichneumon flies and Parasitic Wasps.

Invertebrates were not the only wildlife to enjoy. Numerous native plants were in flower such as Wild Rose, Hawthorn, Guelder Rose, Spindle, Red Valerian, Common Mouse-ear, Cow Parsley, Herb Robert, Herb Bennet and Woodruff to name just a few. Raven, Barn Owl, Buzzard, Roe Deer, a number of Hares as well as a variety of farmland birds were also spotted.

Editor's note
493 Coleophora serratella
The larva feeds by inserting its head into small mines it creates on the leaves of birch (Betula), elm (Ulmus), alder (Alnus), or hazel (Corylus). Occasionally it is found feeding on other trees, or on herbaceous plants onto which it has accidentally fallen.
Pupation, June - early July, is in the larval case fixed to the upper surface of a leaf in a sunny situation. Sometimes pupation is on plants other than those fed on.

We have had several people stay in our holiday cottages on our farm, who have been members of Naturalists Societies and have recommended us to their groups as a great place to stay for those interested in bird and wildlife and how conservation can prosper on a working farm.
We would like to offer your members a 10% discount off the cost of booking either The Old Bothy (sleeps 4), or The Old Grainstore (sleeps 6) for either a short break (3 nights) – or longer.
Please check out our website – www.redhallcottages.co.uk
Please do not hesitate to contact me if you require any additional information, or you would like me to send some cards down for you.
Kind Regards,
Joanne and Martin Baird,
Red Hall Farm Holiday Cottages,
Red Hall,
Red Dial,
Wigton,
Cumbria
CA7 8NX
Tel 016973 42249
Mob 07906 852224
Web www.redhallcottages.co.uk
Email stay@redhallcottages.co.uk
Posted by steve curtis at 2:06:00 pm No comments:

Eighteen members joined the leader for a morning walk from Radstock to Kilmersdon & back. While waiting for members to arrive several of us spotted 3 Mistle Thrushes close by in a tree next to the car park behind Radstock library. On leaving the car park we walked along Church St then Meadow View to join the Colliers Way. Once on the Colliers Way I felt a sudden drop in temperature & looking up the sky had become very cloudy which I suspected meant rain. However rain did not materialise as the rest of the morning grew sunnier & warmer.
Walking along the cycleway birdsong was in full flow with Song Thrush & Robins to the fore. Though most of the birds being listed as heard was the result of Lucy’s brilliant hearing as usual. A Common Carder Bee was observed adjacent to the cycleway. Near the Sewage works good views of Raven, Yellowhammer & Peregrine were observed. After leaving the Colliers way we walked along the road towards Kilmersdon for a short distance before traversing our way across two fields to rejoin the cycleway & return to the car park in Radstock. [TR].

The above figures, which are 50% down on last year, have been surprising and rather disappointing given the fairly mild spring.  There were several wet evenings when we would have expected more amphibians to be crossing and it is difficult to back up any theories for this year's decline.  Some suggestions are:

But these are just ideas without any evidence and it may be just a natural cycle, certainly in 2007 and 2008 there was a similar dip in sightings, but numbers recovered in 2009 so we will hope for the same next year.  On a positive note we were heartened to see a lot of spawn in the lake, and it was good also that all of the amphibians were a good size and seemed healthy with no sign of disease. 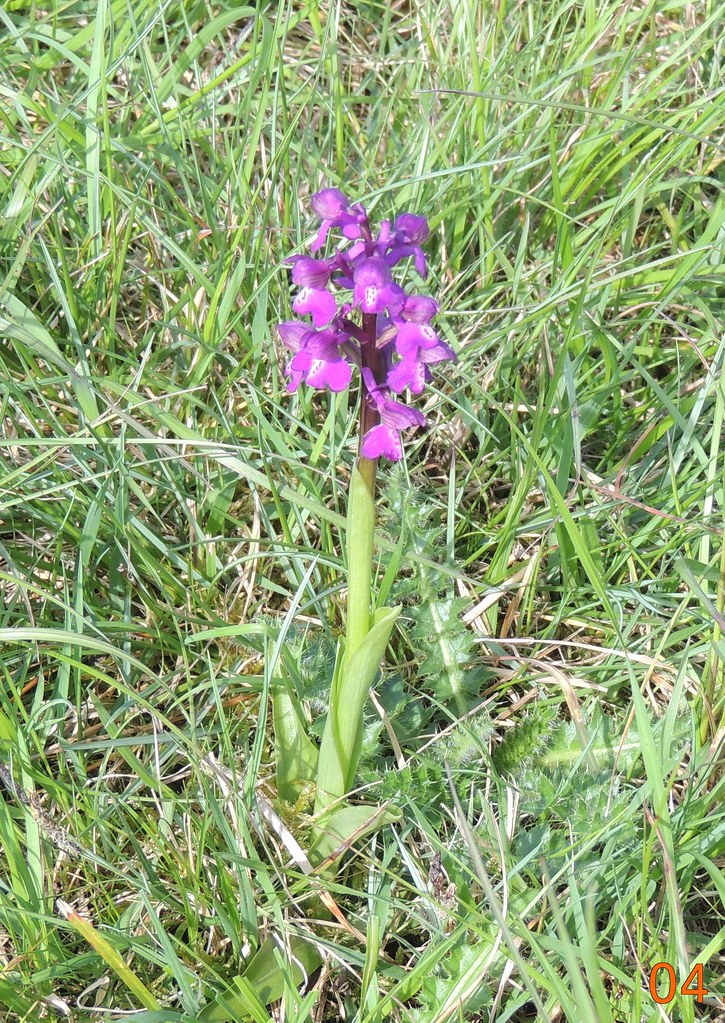 Photo by Mike Goodchild
Posted by steve curtis at 7:29:00 pm No comments:

Bathampton meadows and the oxbow lake 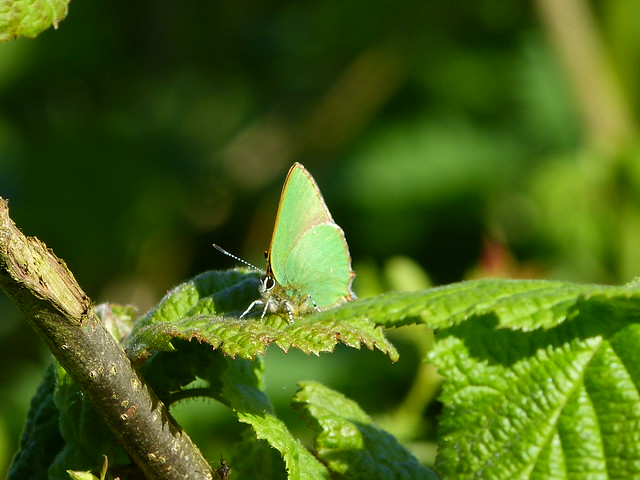 Further information
A telescope is useful, as the only viewing is from the edge of the site to avoid disturbing the birds.
Access
By permit only to Trust members. Please contact members@avonwildlifetrust.org.uk or telephone 0117 9177270. 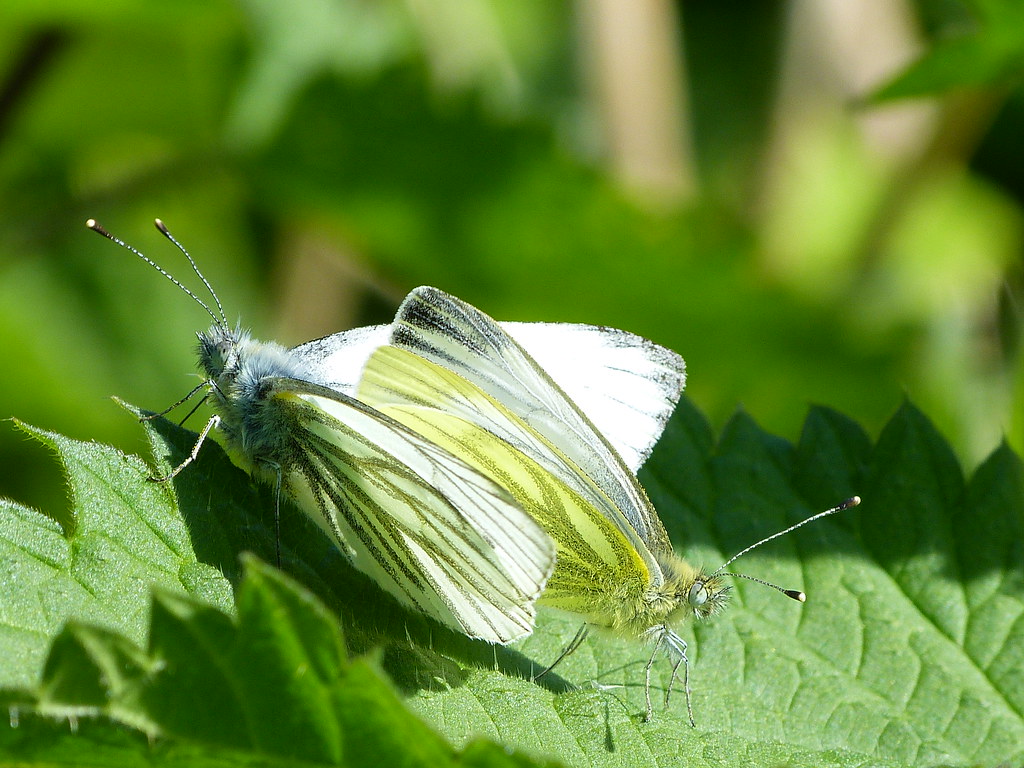