I have a near acre of garden off  steway lane which for the last 5 years or so I have been trying to make wildlife friendly a small part is used for veg the rest for wildlife I have three pounds the largest about 12ft by 6 ft.  I am hoping to record with the camera the wildlife that turns up there here is a start.

Plenty of Assure Blue Damsel on the pound along with good numbers of large Red Damsel, Male Broad bodied chasers chasing each other all day I would love to know how many times the territory changes owner.

Great view of a Red Admiral on the Buddleia which is just starting to flower, also a few Ringlets about.

Special features:  Crab spiders are able to change their body colour to match their background.  It can take a few days, but they can appear white, yellow or green.  They sometimes have two faint red lines running along the abdomen, but these are not always visible.  The male is much smaller than the female.The crab spider sits on flowers waiting for insects to land close by, and then pounces on them - trapping them between their crab-like front legs.

All the best Steve

Amazing trees and their natural history found near the centre of the city of Bath were explored with reference to ‘The Tree Gazing Trail’ developed by the Bath Royal Literary and Scientific Institution (BRLSI) in partnership with Mark Cassidy, BNES Arboricultural Officer.  Beginning at the gravel walk, at the eastern end of Royal Victoria Park, the trail identifies 20 trees along a route which includes the Botanical Gardens found on the North Western side of the park.  As well as learning about the unique stories of the trees; the walk gives a chance to encounter a range of flora and fauna along the way.

Included on our walk were native species, eg copper beech (Fagus sylvatica purpurea); species originally from  Europe, eg London plane (Platanus x hispanica); a ‘living fossil’, maidenhair tree (Gingko biloba) with divided leaves; and a deciduous conifer once thought to be extinct, dawn redwood (Metasequoia glyptostroboides). A notable discovery was the richness of the epiphytic communities on both copper beech and London plane trees.  With the aid of hand-lenses, these communities were found to include a surprising array of mosses and lichens.  These included plait-moss, Hypnum cupressiforme, green yoke-moss, Zygodon viridissimus and Physcia adscendens, a grey lichen.

Birdsong accompanied the walk. Taking time for just a few minutes of stillness, blackbird, wren and blackcap song could be heard.  Wildflowers flourishing in shady places under the tree canopy included the bulbous buttercup.

In summary, a fascinating morning spent looking at a diverse range of trees in late spring; at a distance and close-up.

Kate Souter
Posted by steve curtis at 2:04:00 pm No comments: 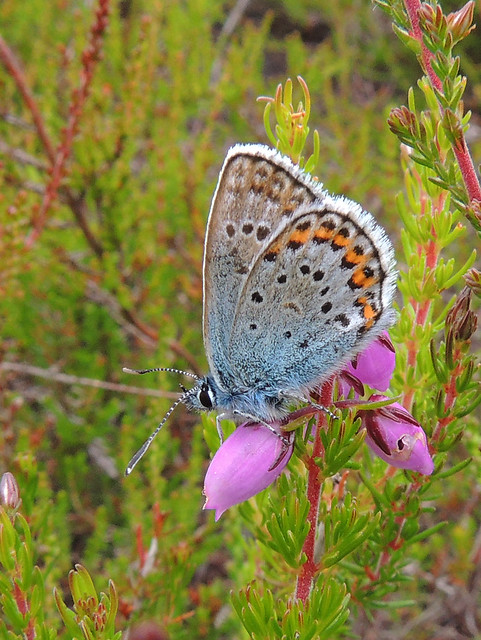 Much talent, enthusiasm and imagination was in evidence in the eleven contributions made to this meeting, making for a truly special evening in which conversation and inspiration flourished amongst the nineteen members of the society who came. To begin with, we were faced with the problem of how to re-arrange the seating and distribution of tables and display screens around the Elwin Room so as to accommodate the art works as they were brought in, and allow people comfortably to view and flow around them. Solving this problem proved to be quite a work of improvisational art in itself, but eventually a layout emerged, which seemed to work well. Let me take you on a ‘guided meander’ from north to south around the room as I recollect each exhibit in turn.
To start with something truly remarkable, the five meticulously detailed natural history record books compiled by Ron Watts from 1984-1998 –  complete with moving personal notes, photographs, paintings and drawings, and recently donated to the Society by his daughter-in-law – were a source of great interest. Ron was born in Bath in 1923 and died in 2011. His father and uncle owned and ran the dairy on Camden Crescent, which was later changed into Claremont Post Office. After serving in the Royal Navy in WW2, he joined his father at the post office where he later took over as sub-postmaster, eventually retiring in 1983. Ron and his wife loved to go walking, where he made notes and photographed what he saw – especially in the area of Charlcombe – and on his return home would always type up a report before doing anything else. I intend to display his books at future Bath Nats indoor meetings and am planning a field meeting in Charlcombe next March, to follow some of his footsteps.
Nearby, on a screen next to the window, Caroline Frances-King presented a small portfolio of paintings on the theme ‘The Discipline of Botanical Art’ focussing on a display that recently won a Silver Gilt medal at the Royal Horticultural Society Botanical Art Show in London. These extraordinarily carefully observed paintings showed the wonderful detail and patterns that are present in a leaf, a withering Magnolia fruit or a piece of birch bark, which are revealed when we take pause to examine them closely.
On adjacent tables,  Andrew Daw’s skilful, meticulously observed watercolour, gouache and pen and ink paintings and drawing of ‘zoological still life’ (respectively of purple hairstreak, large skipper, small copper and small tortoiseshell butterflies and kestrel) were a fine accompaniment, while displays of work by Bill Bristow and Sue Coles explored photographic and verbal  art forms. Bill’s three photographs, entitled ‘Theme, Variation’, juxtaposed images of male silver-washed fritillary, comma and valezina silver-washed fritillary butterflies on hemp agrimony. Sue’s poem, ‘My Old Friend’, celebrated and related her love of memories evoked in the language of books to her appreciation of patterns recalled in the natural history of living form: it contained the salient line, ‘opening a book as if it was a bird’s wing’.
Moving across to the west-side of the room, opposite the windows, another screen provided the backcloth for a wonderful montage of photographs of ‘birds and water’ presented by Rod Thomas.  In front of this stood a very tactile carving in cherry wood of a redshank, with bright red-painted bill and legs.  As I fingered this, I could sense all the sweat, tears and indeed blood that must have gone into its making from such hard wood.
Nearby, on a diagonally aligned table, Paul Wilkins displayed a superb array of his close-up photographs and prints from lino-cuts and wood-etchings that demonstrate not only his passion for and eclectic knowledge of natural history, but also his mastery of diverse media. His portrayal of house sparrows, which he preferred to call ‘spadgers’, was simply breath-taking, although he himself seemed modestly ambivalent about how good it really is. It was great too to see and feel his original very fine-detailed etchings in box wood from which he made his prints.
Progressing from there towards the window, Kate Souter showed her striking, carefully mounted and labelled photographic prints illustrating the dynamic and varied geometry of living form and habitat and how this provides places for resting, nesting and thriving – as well as a source of human inspiration.
This dynamic theme was taken up by Phillip Delve’s captivating arrays of ‘sketches from birding notes’, mounted on hardboard screens set against the windows. Phillip’s skill in rapidly and accurately depicting the essence or ‘jizz’ of a moving subject was greatly appreciated by all of us. We were also fascinated to be shown the story of how Bath Nats logo came into being, through several stages of evolution, in large part based on drawings made by Phillip and Andrew Daw.
The meander comes to its conclusion on a table and set of chairs at the south end of the room, where Marion and Alan Rayner set out their contributions. Marion showed diverse images of flora, fauna and habitat that she had produced using ink and watercolour, pastel , oil pastel and paper-cutting techniques. Several of us remarked on how, rather like Phillip, but in a very different way, she was able to convey the ‘essence’ of her subject using these techniques, simply but effectively.  My own contribution was a set of five colourful oil paintings on board or canvas, from a recent, small exhibition entitled ‘I-opening’ in Bathford Community Shop.  They express how my own imagination and receptive self-awareness are awakened by my knowledge of and feeling for the natural world.

The day got off to a promising start as, whilst setting up the training room, an active mole-hill outside the window kept us on tenterhooks wishing that its creator would make an appearance. Unfortunately the newcomers and families we'd hoped to attract were not so eager to join us so, at 11.15, six Bath Nats members set out for a tour of the farm.

We were immediately distracted by a sparrowhawk - with prey - flying overhead amongst several screeching swifts, and as we passed along the top field with its fantastic view of Bath we briefly glimpsed a raven in the distance. As we escaped further from the bustle of the farm buildings the bird soundscape took shape in the form of house martins, chiff-chaffs, and a truly enormous flock of resident jackdaws.

The wooded areas of the farm revealed modest numbers of fungi and a particularly fine slime mould, cue for Alan F to fascinate us with their astoundingly complicated life-cycle. Further on, between fields, an amazingly gnarled and rotten willow tree, clad with ivy, turned out to be housing a nest of a newcomer to the UK - the tree bumblebee. Flowers in the fields were disappointingly scarce, with only isolated examples such as yellow meadow vetchling and bird's foot trefoil, but it was perfect timing for flowering grasses, which we collected diligently throughout the morning.

Laid out on the training room table, these 20 beautiful grass species provided ample resource for Alan R to inspire us with his insightful tips on identification as the afternoon got underway. With still no youngsters arriving we decided to forego the pond-dipping but indulge nonetheless in a little tree-bashing. The star species of the day was then found at the small pond in the farm allotments; a broad-bodied chaser who obligingly entertained us for some time, and abruptly upstaged the damselflies (azure and large red) that were abundant both here and at the large pond earlier in the day.

Also deserving of a mention were several butterflies including large skipper, meadow brown and speckled wood, and the wonderful examples of moth - from micro moth to elephant hawk moth - kindly brought in by Paul for our enjoyment.

Janine Scarisbrick
Posted by steve curtis at 1:29:00 pm No comments:

9 SIG members enjoyed a “Bird Watching With Your Eyes Closed” stroll along the lake margin and into light woodland. We were joined by about 100 low flying swifts, some at head height, probably
due to the cool, windy and mainly overcast conditions..
Both target species were singing well, the light, mainly three note song of the RB clearly heard, contrasting well with the harsher ramblings of the RW. The RW's were occasionally seen flitting
among the reeds while the male RB's song displays were in full sight. One handsome male in full breeding plumage posed so well that his song could be matched with his bill movements. A pair of RB's were seen with the female taking food to an unseen low level nest while the male remained  on guard.
Non bird species seen included green veined white, speckled wood, and common blue butterflies,
four-spotted chaser (Libellula quadrimaculata) dragonfly and three fat, woolly larvae (caterpillars)
of the Drinker (Philudoria potatoria), an Eggar Moth.
The pleasant morning ended with a twitch to try for a Great Reed Warbler reported seen at the bridge, unfortunately not successful, but we were flown out by two hunting hobbies.