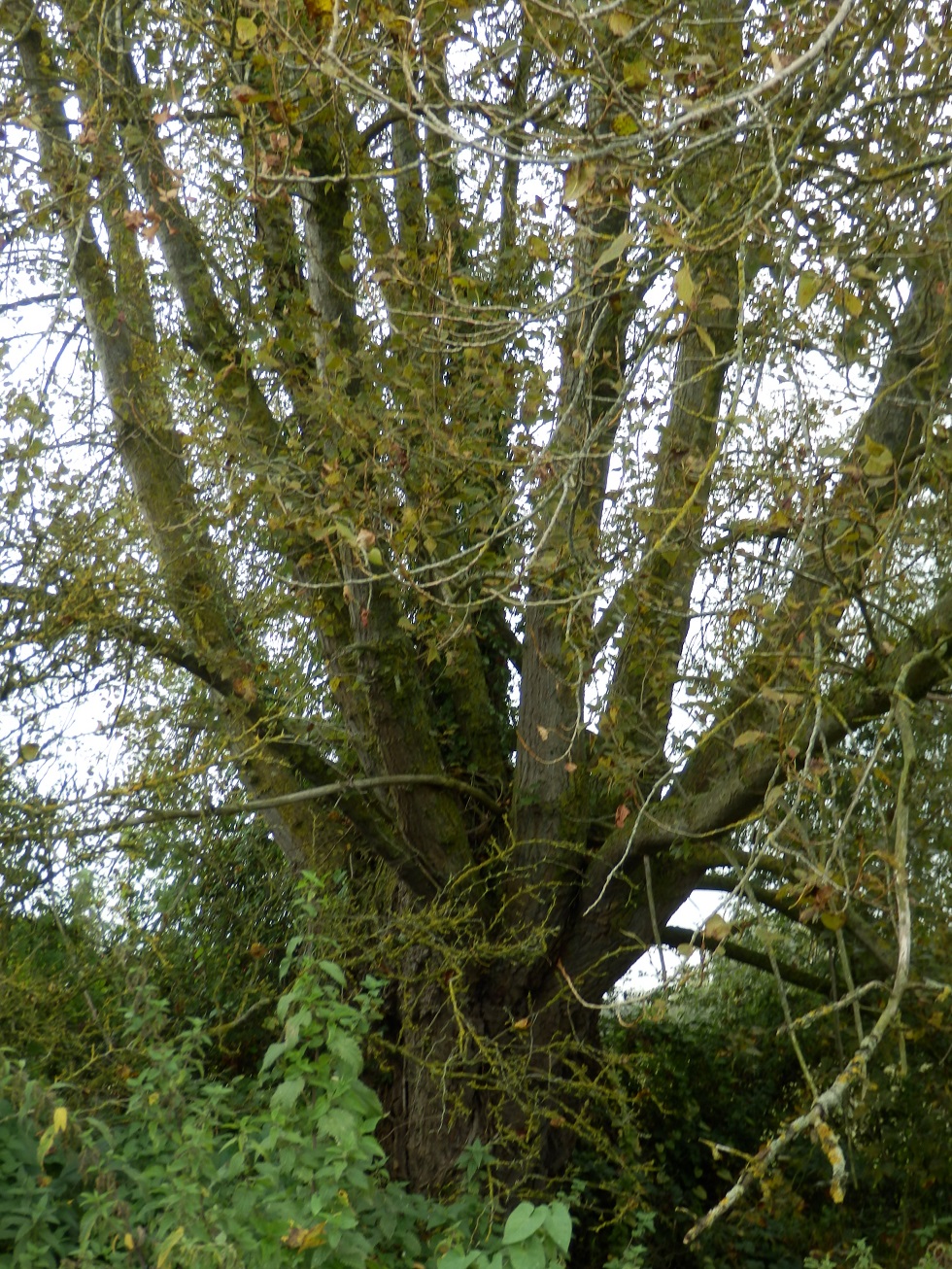 Light drizzle greeted the eighteen assembled members, some of whom had driven
up in thick fog to get to the site which includes two of the largest man-made lakes in
the Cotswold Water Park. Visibility soon improved to leave a day that was dull in
terms of weather but far from dull in terms of natural history interest.

Managed by the Cotswolds Water Park Trust, Cleveland Lakes is the most important
site for breeding and passage water birds in the Water Park and Bath Nats were
privileged in being allowed to visit areas of the reserve not yet open to the public as
quarrying activities are only just coming to an end on part of the site.

The party entered the reserve along the permissive footpath where a thick hedge of
native scrub species served to provide cover for the birds in the reed-beds beyond
and also provide excellent habitat for small birds. In places, the scrub had been
augmented to encourage breeding Nightingales which are thriving in the Cotswold
Water Park, in sharp contrast to their national decline. Rare native Barberry bushes
had been planted along one stretch to provide habitat for the even rarer Barberry
Carpet Moth (Pareulype berberata). It is to be hoped that the important populations
of Lesser Horseshoe Bat that use the reserve favour other moth species!

We stopped at several breaks in the cover to observe the birds on the lake that
included breeding populations of Herons, Little Egrets and Great Crested Grebes,
the latter being busily engaged in their courtship activities. . Excellent views of the
birds on the lake were also had from the attractively designed bird-hide that had
sadly suffered some serious vandalism. Large numbers of Wigeon were seen.

Reed Buntings flitted in and out of the reed-swamp and a Cetti’s Warbler could be
heard singing loudly in the scrub. At one point, 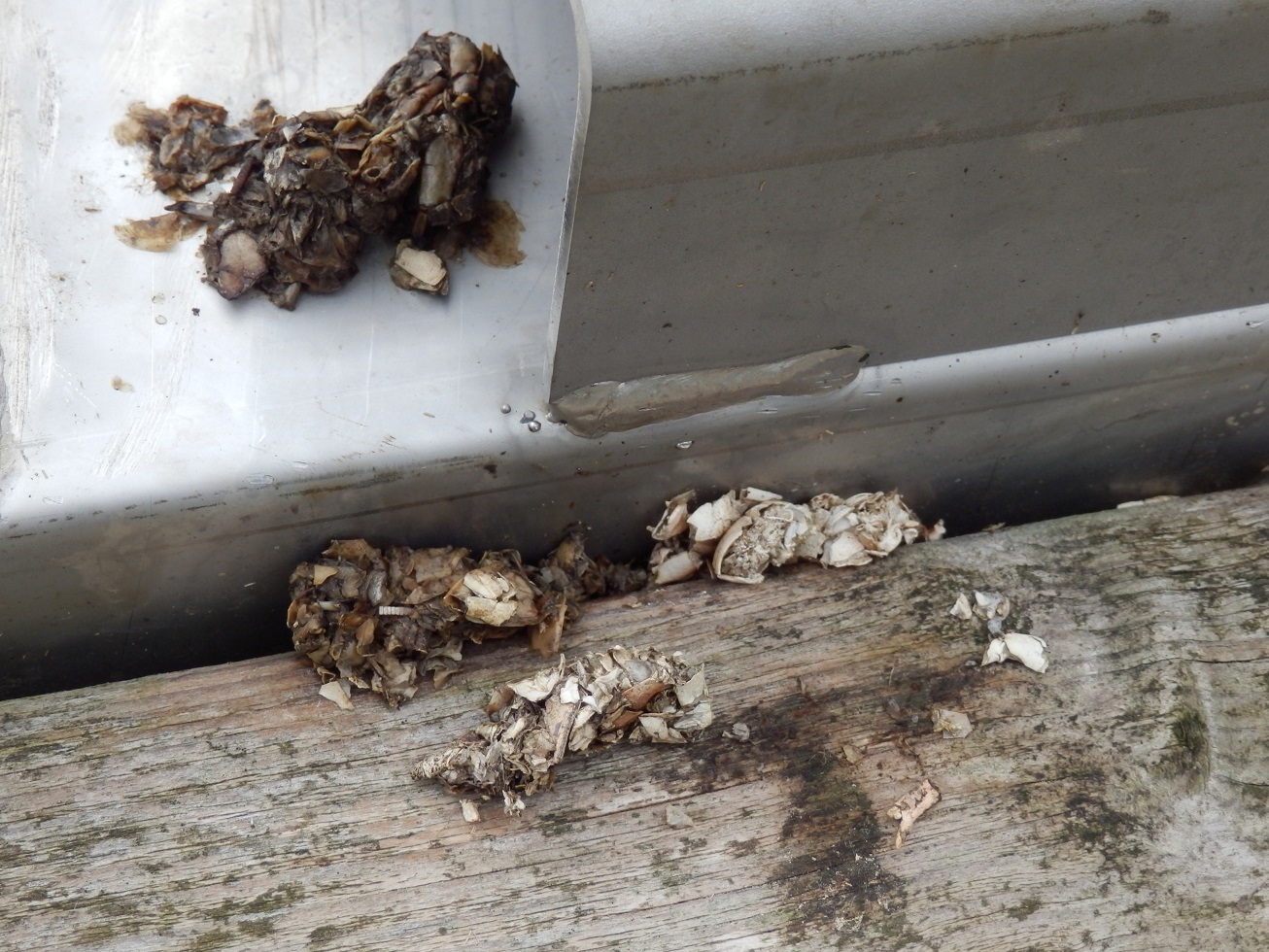 Otter spraints were pointed out and
were clearly seen to contain the hard indigestible remains of the American Crayfish.

We then left the public area of the reserve to view the permanent shallow scrapes
where a sluice is used to manage water levels in late summer and autumn so as to
provide suitable conditions for feeding passage water birds and waders. A Hobby
was seen in the distance and a Ruff sat conveniently in our main field of vision
behind which were flocks of Lapwing and Gadwall. Several resident Herons patrolled
the area, putting up the other birds as they did so.

As we walked towards the active quarrying area (the site closed at lunchtime), an
invitation to walk through part of the reed-bed to flush up any Snipe present did not
produce results but some fine specimens of 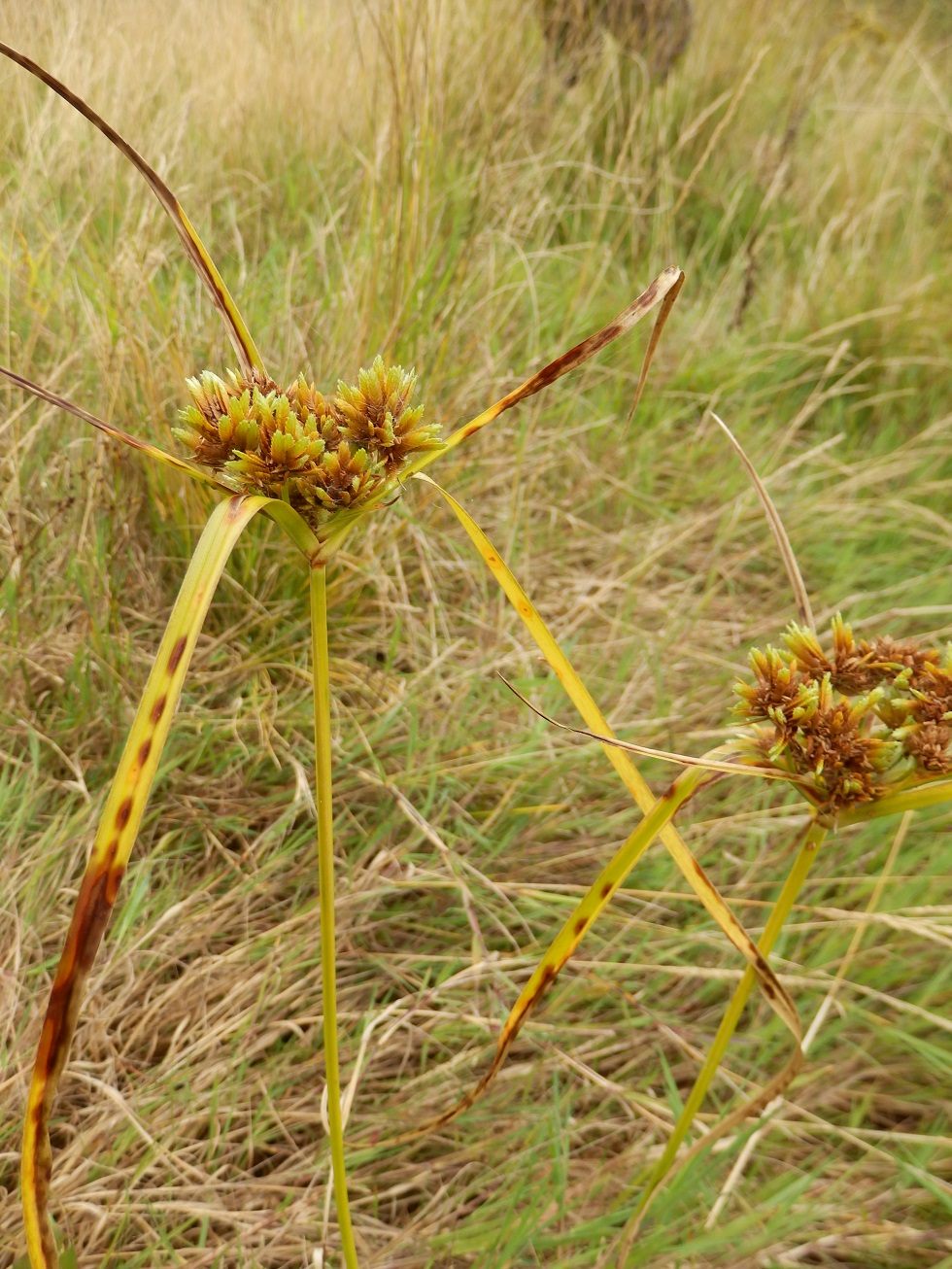 Pale Gallingale (Cyperus eragrostis)
were noted. Entering the quarry area, we stopped to view the ‘moonscape’ of a large


empty pit that had only recently been dug out, its un-restored steep sides making it
both a safety hazard and of little value to wildlife. Restoration would involve re-
profiling the edges of the pit with waste from development sites to provide the gently
sloping contours that favour vegetation growth and provide suitable habitat for birds.

Before leaving the active quarry area, we passed between two pits where soil bunds

-erected on either side to prevent vehicles falling into the water – had created ideal
conditions for a rich variety of plants that favour disturbed ground. These included
Small Toadflax (Chaenorhinum minus), Red Goosefoot (Chenopodium rubrum),
Weld (Reseda luteola) and Wild Mignonette (Reseda lutea). 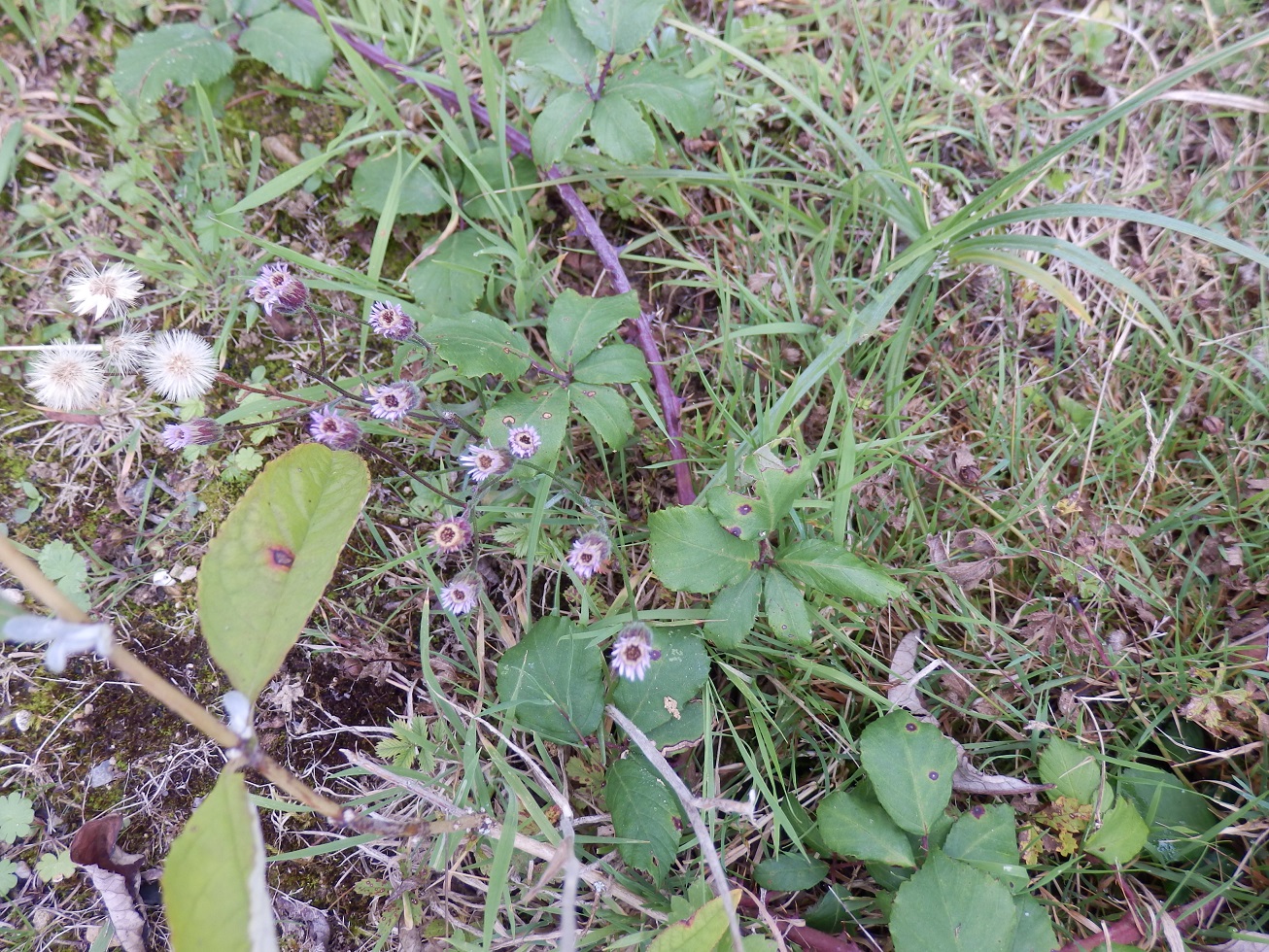 Blue Fleabane
(Erigeron acer) was also seen as we joined the footpath back. A Bullfinch provided
some final interest before we turned into the car-park for a vote of thanks to the
leaders for a most interesting and varied meeting.


Many thanks to Marion Rayner for the photos
Posted by steve curtis at 12:17:00 pm No comments:

It’s that time of year when there’s little else to interest me in the garden except queen bumblebees. These large, furry bees are the daughters of the founding queens of nests established in spring. The nest and founding queen, along with her workers and males are by now dead or dying; only the daughter queens remain, having mated with the males in summer.
Queen bumblebees are bigger than workers and males because they need to be robust. Not only do they hibernate over winter, but then they spend all spring and summer laying eggs. Most bumblebees live for only around six weeks, but queens are tough – many live for nine months. At this time of year, if they haven’t already gone into hibernation, they are stocking up on nectar to build up their fat reserves. Many then don’t eat anything at all for up to six months.

Buff tailed queen bumblebee
And so the queen bees I am seeing in gardens, parks and allotments now are feasting on the nectar of abelia, Verbena bonariensis, hebe, Japanes anemones, passion flower, ivy and fennel. Mostly they are buff-tailed bumblebees, Bombus terrestris, but I have also seen the queens of tree bumblebees, Bombus hypnorum, and red-tailed bumblebees, Bombus lapidarius.
I think one queen has found a nice hibernation spot in the bricks above my bedroom window. I have seen her going in and out on several occasions; presumably she’s not quite ready to go to sleep yet. Other hibernation sites include holes in the ground, compost heaps and piles of autumn leaves. As long as they remain dry and cool over winter, they have a good chance of survival.
We have a great range of bee hives and nesters if you want to go the extra mile of attracting larger numbers of bees.
When they wake up in spring they will be hungry. They need food and they need it fast. They need nectar to give them the energy to fly to find a nest, and then pollen to expand their ovaries so they can fertilise their eggs and start a new colony.
As early as February I’ve seen queen bumblebees clinging to unopened crocus flowers, willing them to open.
If you have a garden then please plant some crocuses for emerging queen bumblebees in spring. Other early spring bulbs for bees include snake’s head fritillary, snowdrop and grape hyacinth, while good later flowering species include allium and English bluebells. You could also plant some hellebores, lungwort and primroses. The huge bees you see feasting on the last of the summer flowers now are the same bees you’ll see crawling on the ground in spring. The more flowers we grow for them, the greater their chances of survival.
The post Queen bumblebees and autumn flowers appeared first on Wildlife Trackers.
Posted by steve curtis at 9:31:00 am No comments:

On a fine day, a party of seventeen assembled to explore East Harptree Woods.   The site is owned by the Forestry Commission and is a mixed plantation of coniferous and broad-leaved trees with areas of heathland and wide forest rides. The leaders explained the geology and history of mining and smelting activity which have created the mosaic of vegetation on the site, after which we set off along the main ride.  Slender Rush (Juncus tenuis) was pointed out: an American species, most often found on woodland rides, which appears to be increasing locally.  Coal Tit (Periparus ater), Bullfinch (Pyrrhula pyrrhula) and Nuthatch (Sitta europaea) were heard.  Forays were made into the woodland to admire the array of bryophytes, particularly Bank Haircap (Polytrichastrum formosum), Common Tamarisk-moss (Thuidium tamariscinum), Common Feather-moss (Kindbergia praelonga) and Waved Silk-moss (Plagiothecium undulatum).  Taking the small path through dense trees towards Smitham Chimney, many mycological stops were made.  We found False Chanterelle (Hygrophoropsis aurantiaca), Bay Bolete (Boletus badius), Downy Milkcap (Lactarius pubescens) and the striking Yellow Stagshorn (Calocera viscosa).  Beside the path, a single fruiting spike of Broad-leaved Helleborine (Epipactis helleborine) was seen; more were found later, also fruiting spikes of Common Spotted Orchid (Dactylorhiza fuchsii) and probable hybrids between that species and Southern Marsh Orchid.

Approaching the pond, plants typical of heathland were seen: Purple Moor-grass (Molinia caerulea), Heather (Calluna vulgaris), Tormentil (Potentilla erecta) and Heath Bedstraw (Galium saxatile), with both Gorse (Ulex europaeus) and Western Gorse (Ulex gallii).  Passing the pond, we visited a nearby slag heap to see Sea Campion (Silene uniflora) growing in this unusual habitat, tolerating the heavy metal toxicity and benefitting from low competition of this lead-rich material.  A Spotted Fly-catcher (Muscicarpa striata) was seen from the vantage point of the spoil heap.

We returned past Smitham Chimney to stop by the pond for lunch.  Members were intrigued to see that the chimney (the only remaining part of an extensive Victorian smelting works) contains a vast pile of sticks, presumably dropped from above by nesting Jackdaws.  The pond vegetation is dominated by Water Horsetail (Equisetum fluviatile) and introduced White Water-lily (Nymphaea alba), with large patches of Bog Pondweed (Potamogeton polygonifolius).  Lunch was punctuated by the sightings of dragonflies and damselflies.  During the day we saw Southern Hawker (Aeshna cyanea), Migrant Hawker (Aeshna mixta), Common Darter (Sympetrum striolatum), Ruddy Darter (Sympetrum sanguineum) and Common Blue Damselfly (Enallagma cyathigerum).  Only four species of butterfly were seen all day: Green-veined White (Pieris napi), Speckled Wood (Pararge aegeria), Common Blue (Polyommatus icarus) and a Small Copper (Lycaena phlaeas).

After lunch we took a detour from the track to look at a crumbling old wall, where further Sea Campion was seen.  More excitingly, at least a dozen Common Lizards (Lacerta vivipara) were spotted basking, one of them in the process of shedding its skin.  Harebells (Campanula rotundifolia) and Common Eyebright (Euphrasia nemorosa) were admired beside the path.  The next stop was an area of “gruffy” ground: uneven terrain with patches of bare soil due to high toxicity.  Lead Moss (Ditrichum plumbicola) was discovered here in 2009 by HJC (with Fred Rumsey), and she was able to find a small patch of tiny shoots, each about 5mm tall, for members to admire.  Lead Moss is only known from about 30 localities in Britain and is entirely restricted to lead-enriched sites.  A nearby colourful toadstool was perhaps more impressive: the False Saffron Milkcap (Lactarius deterrimus) produces orange latex and stains a deep orange when cut, with older flesh developing green blotches.  A colourful Carrion Beetle was also spotted here.

Slow progress was made back along the main track, especially because of the abundance of interesting fungi.  Species seen included the Peppery Bolete (Chalciporus piperatus), Birch Bolete (Leccinum scabrum), Blusher (Amanita rubescens) and the much-prized edible Cep (Boletus edulis).  A particularly striking fungus was Coltsfoot Rust (Puccinia poarum) which causes orange spots on the leaves of its host.  On the undersides of the leaves, the spots appear to be collections of tiny goblets filled with gold.  The commonest fern in the wood was Broad Buckler-fern (Dryopteris dilatata), with Male-fern (D. dilatata), Golden-scaled Male-fern (D. affinis) and Lady-fern (Athyrium filix-femina) also seen occasionally, Bracken (Pteridium aquilinum) frequent along the rides and Wall-rue (Asplenium ruta-muraria) and Polypody (Polypodium vulgare) seen on the wall.  A few Hard-ferns (Blechnum spicant) were discovered at the edge of a ditch – the first record for this area since pre-2000 so an excellent find.  Even more exciting was a single clump of Great Wood-rush (Luzula sylvatica) which appears to be a completely new record for the wood or indeed the surrounding area.  Returning to the start, we were delighted to hear Goldcrests (Regulus regulus) in the trees around us.  This walk took in a great range of natural history, with different members able to enthuse the others within their own realms of specialism.  It also demonstrated that there is always something new to be found, even at a much-visited site.