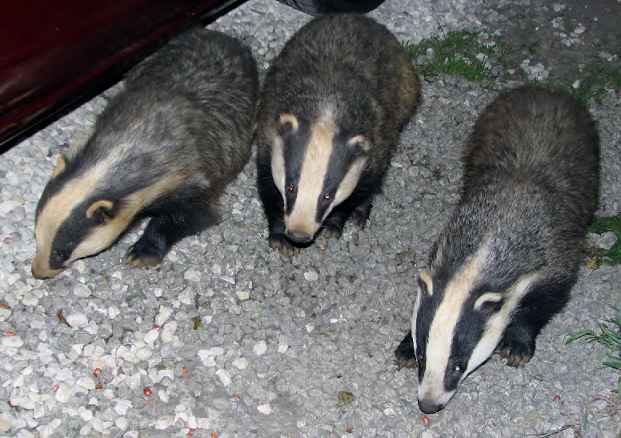 There is a badger set in the lane at the back of my house (Southdown) Two moved in four years ago and had six pups the following spring. some of these have moved on but there are still a couple left and their parents. I am moving out soon and am a nit worried as to their wellbeing when I am gone. If any one would like to observe badgers at close quarters without trudging into the country, with guaranteed viewings, I could accommodate two at a time in my garage / office - I have made a video of four of the pups eating at my office door and put it onto You Tube if any of your members are interested. Badger Nuts 2 is the search term. I have uploaded a photo here too. RegardsLen
Len GunstoneEmail : len@gunstonegroup.co.ukPhone : 07976 715157
Posted by steve curtis at 11:27:00 pm No comments:

Another interesting visitor to the Botanical Gdns pond

Sunday 9th November
Waiting for Lunch at the Botanical Gdns 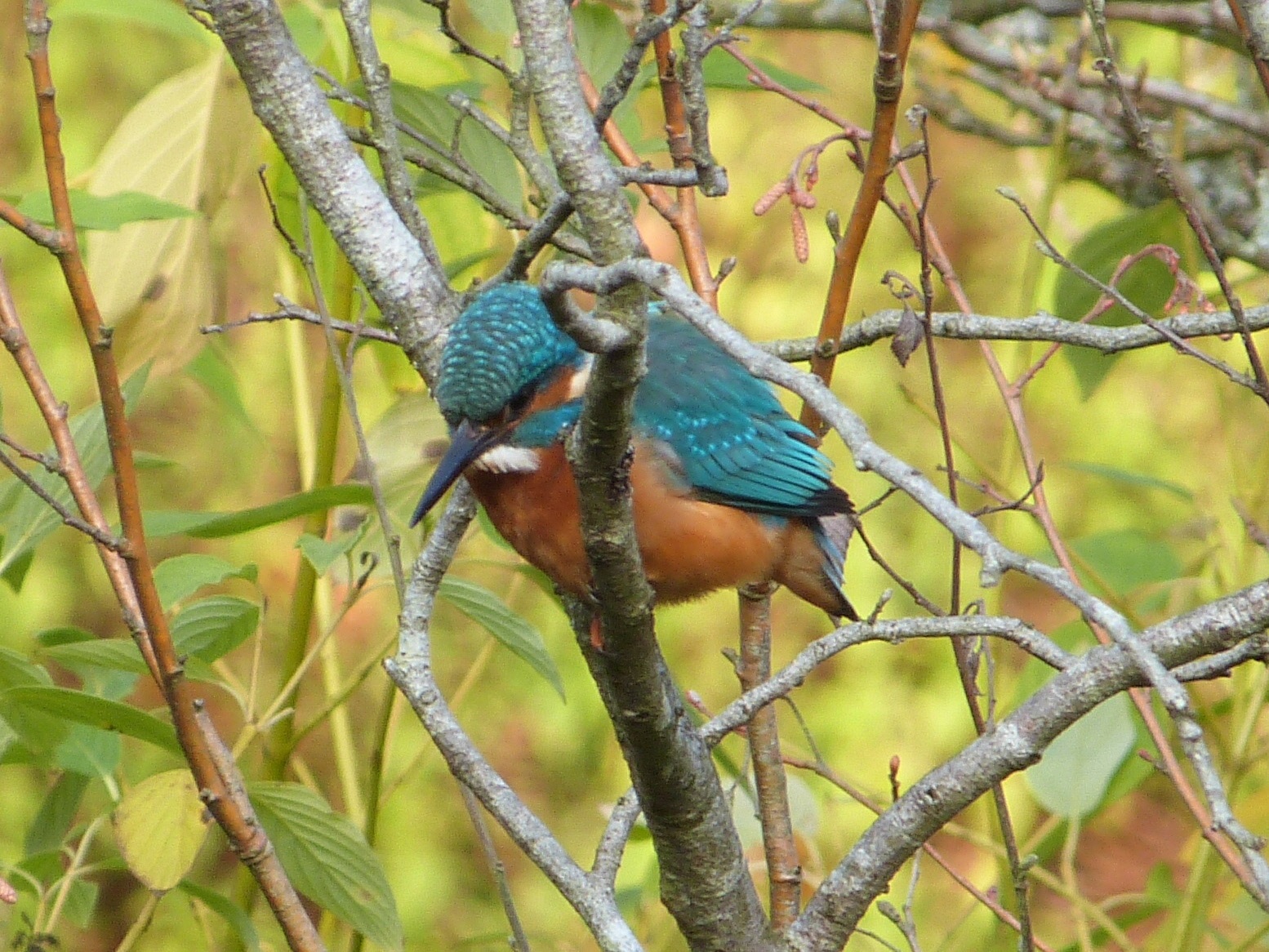 Led and written by Alan Barrett

Despite a shaky start to the day when the coach had to return to Radstock to pick up four
members who had been shocked to see it ‘sail’ past them at the Hotel, 32 of us set off in
glorious sunshine! The forecast for Titchfield was heavy rain showers all day! We
encountered our first, a very heavy one, just as we, and two more members, arrived! After
that, our only other one was at lunchtime, when some of us were in a hide and others were
sadly between hides! The rest of the day was warm and sunny.

The Titchfield Haven National Nature Reserve covers 369 acres of the Meon Valley. Apart
from the river running through it, it has a mosaic of fen, pools, reedbed and meadow,
managed by Hampshire County Council. It is part of the Chilling Coastal Area on the Solent over
1000 acres purchased by the Council in 1970 to secure areas of open countryside in an
increasingly developed part of the south coast. It is managed to achieve conservation
objectives and to enable the public to enjoy beautiful scenery and wildlife. This probably
provides more protection than would SSSI designation.

The reserve has a visitor centre with a shop, a picture gallery and tea rooms serving hot food,
drinks and home-made cakes. There are eight hides, conveniently four on east and west sides
to visit in the morning and afternoon respectively to have the sun behind you. In view of the
bad weather forecast, there were hardly any other visitors and no photographers taking two
seats each. So, we were able to have good views.

On the east side the Boardwalk Trail (1 mile return) passes mainly through wet woodland
with two ponds where water rails and voles can be seen, as well as warblers, tits and
goldcrests. Pig-like squeals of water rails were heard. A quiet version of the usually loud and
elusive Cetti’s warbler was heard, presumed to be by a juvenile learning the call. The east
hides look mainly over the Meon River, where kingfishers are most likely to be seen, as we
discovered. The north one of these, Knight Bank, looks over a meadow and a narrow strip of
river where stonechats and meadow pipits can be seen. A kestrel, sparrowhawk and buzzard
were spotted. Another hide, Suffern, had herring, common and black-headed gulls, gadwall,
little grebe, magpie and cormorant. A large flock of Canada geese flew past. The best of the
east hides, called Meadow, overlooks Duck Bay. It is a large newly-built hexagonal hide with
good windows all round and space in the middle for viewing with telescopes. Birds seen here
included stonechats, buzzard, green woodpecker, swallow, house martin, kingfisher, wren,
lapwing, starlings, moorhen, robin and barnacle geese. A Cetti’s warbler and a Jay were
heard.

The west hides are reached by walking along the promenade. The tide was now high, and
mallards and mute and black swans were on view. We had seen a flock of turnstones on the
beach when we arrived. There is a public viewing place on the roadside where waders, driven
in by the high tide, stand on rafts close by in the reserve. We saw only black headed gulls.
The highlight of this venture was a common lizard, spotted and photographed by Linda, as it
sat curled up on a branch of ivy on a wall. Then Helen spotted a wood mouse moving nearby.

From the road the Scrapes Trail (1.3 miles return) serves the west hides. After a short walk
there is a small platform to look over a reed bed for bearded tits. One was thought to have


been heard but not seen. 25 were recorded the previous week as they flew around the reserve
in family parties. The Meon Shore Hide, the best I think, overlooks several islands marked
with letters for ease of reference. Here we added ruff, great white and little egret close
together for comparison, teal, shoveller, black-tailed godwit, redshank, snipe, water rail,
photographed by Tim, many oystercatchers, moorhen, pochard and wigeon. We had close
views of many of these birds. During our recce, Gillian and I had even closer ones as the
water was a little lower. The highlight was seeing two snipes on the edge of a mud bank
fighting for several minutes providing time to photograph them. Two more hides added
avocet and greenshank. Over 40 bird species were recorded plus red admiral, speckled wood
and clouded yellow butterflies, a drone hoverfly, and migrant hawker and common darter
dragonflies. It was a most enjoyable day. 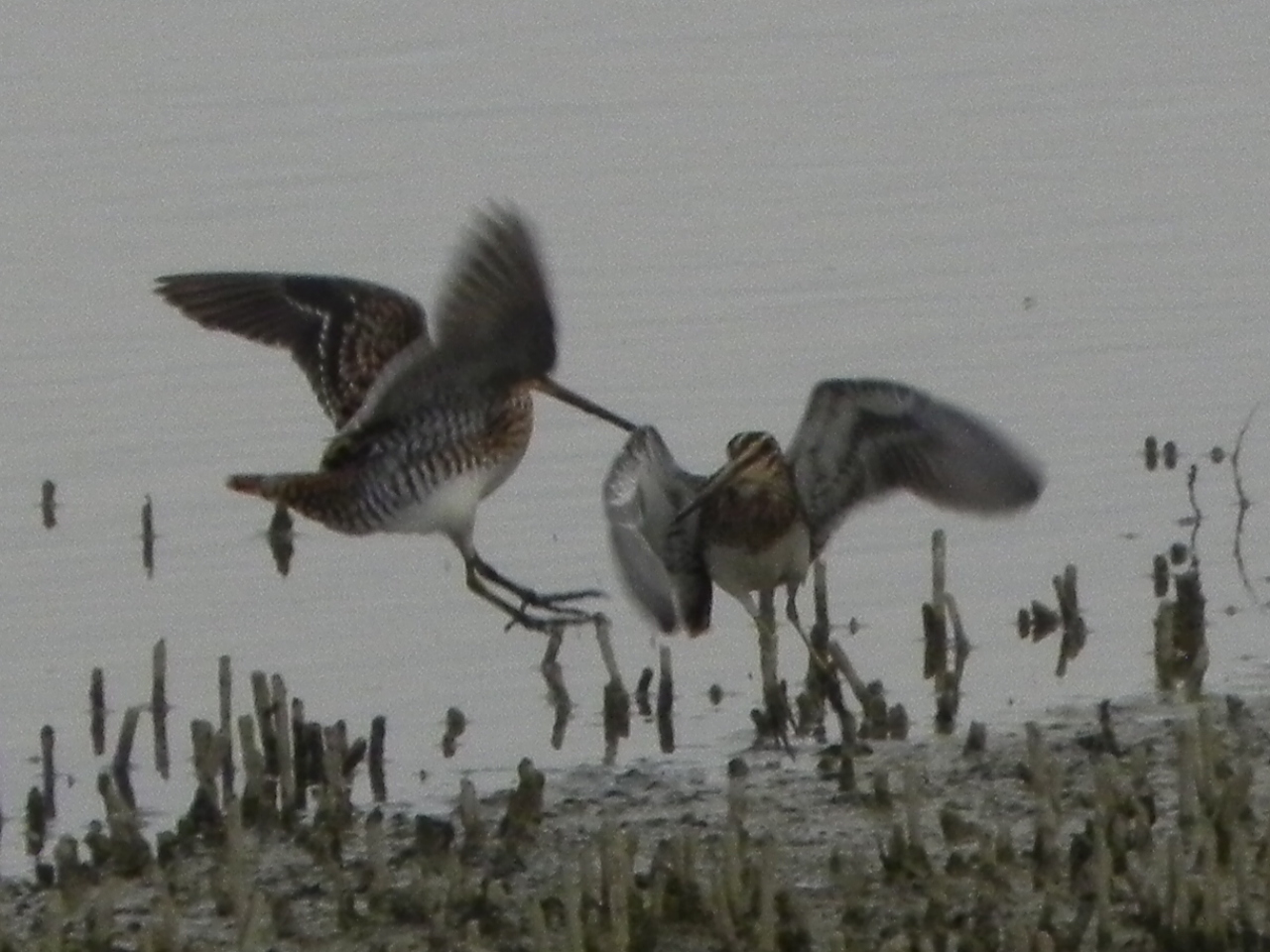 Thanks to Alan Barrett
Posted by steve curtis at 7:37:00 pm No comments:


This field meeting, during a quiet, dry, bright autumn interval between two overnight
spells of rain and wind, was, for me, amongst the most enjoyable and fruitful of this year.
I was greatly heartened by the turnout of around 35 people and the interest and pleasure
expressed to me by many. The fungi put on quite a good show too, having been quite
inhibited by the dry September!

Perhaps the convivial spirit of the meeting had something to do with the fact that several
participants arrived early, to enjoy the refreshment available at the Fox & Hounds,
Farleigh Wick. As we gathered in the car park, we were joined by Carol Whitehead, who
told us that her father-in-law, Dr Denis Whitehead, had sadly passed on earlier in the
week. But at least he had been at home, in the place he loved and whose wonderfully
diverse natural history he was so happy to share with individuals and groups who
appreciate it. We felt his welcoming influence with us as we were met by Judith, his
housekeeper, and guided by her through the beautiful gardens of Inwoods before entering
the woodland itself.

The garden lawns quickly rewarded us with some delightful and brightly coloured fungi:
Snowy Waxcap (Hygrocybe virginea), Persistent Waxcap (H.acutoconica), Yellow Club
(Clavulinopsis helvola), White Spindles (Clavaria fragilis), Collared Mosscup
(Rickenella swartzii) and Ivory Bonnet (Mycena flavoalba). Just before entering the
woodland, we found some specimens of Crab Brittlegill (Russula xerampelina) growing
in association with the roots of a birch tree, with which it forms ectomycorrhizal
partnerships, and were able to affirm its distinctive odour.

After such a display in the garden, the woodland seemed initially less fruitful, though we
did see some fine rich red-brown brackets of Oak Curtain Crust (Hymenochaete
rubiginosa) on decaying oak heartwood, and Glue Crust (Hymenochaete corrugate)
bonding Hazel branches together. Then, in the middle of the beautiful central glade, we
found some lovely salmon-apricot coloured specimens of Meadow Waxcap (Hygrocybe
pratensis) nestling amongst the short grass. Moving on to the part of the woodland in
which large beech trees occur, the number of fungal finds increased dramatically. These
included two special finds: Spiny Puffball (Lycoperdon echinatum), which looks like a
baby hedgehog, and Felt Saddle (Helvella macropus) in which the saddle-shaped spore-
producing surface is held aloft by a stalk with a velvety covering. Finally we gathered
under a magnificent beech tree to observe the extensive network of mycelial cords
formed by Whitelaced Shank (Megacollybia platyphylla) that I once demonstrated in the
1980s on a BBC ‘Horizon’ programme called ‘The Britannic Greenhouse’. I like to think
of this as part of the legacy of Denis Whitehead and his kindness to me in those days.

Then we ‘hot-footed’ it back to the Fox & Hounds, almost on schedule for 4 pm.