Happy Christmas and New Year to all our viewers.

And my thanks to everyone who has contributed. 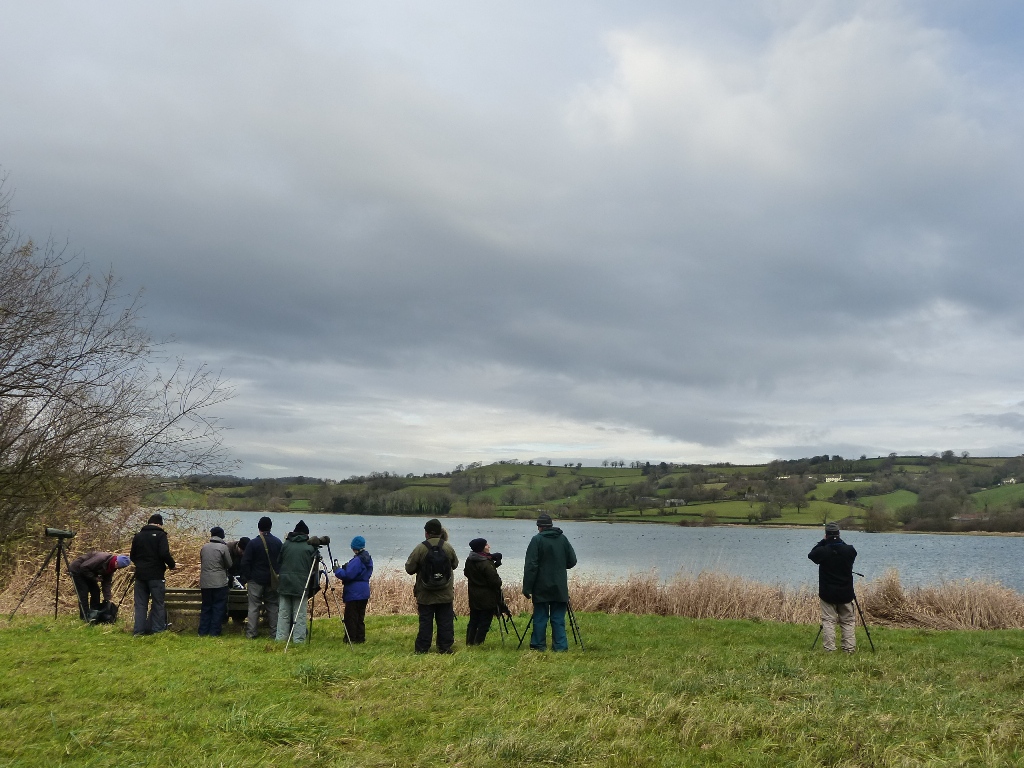 On this cool morning, fourteen of us met by the Dam at Blagdon Lake. Sheltered from a stiff southerly wind by the Mendip Hills, the lake was relatively calm, glinting under a grey sky.  Many water birds were visible, predominantly Coot and Tufted Ducks with the occasional Great Crested Grebe. Almost immediately we were finding less common birds on the lake. While scanning through a distant flock of Common and Black-headed Gulls, two Mediterranean Gulls were spotted briefly and seen by a lucky few. Despite a determined search and deploying several telescopes we were unable to relocate either gull. Then we spotted an immature Peregrine Falcon flying down the lake, putting up the gulls until these in turn began to mob the Peregrine!

Before moving our cars into the Bristol Water lodge car park, Nigel Milbourne our leader for the day, showed us inside the old “venturi house” to explain recent adaptations to promote bat conservation. Blagdon Lake has been found to provide significant habitat for several bat species, including the little studied Nathusius’ pipistrelle, which have been recorded advertising from the “venturi house”. Other bats using the building include Brown long-eared and Soprano pipistrelles. One significant feature of the “venturi house” is a deep pit below, providing cave like conditions for bat hibernation.

From the lodge we walked the metalled track along the south shore of the lake following various inlets.
A Black-necked Grebe with striking ruby red eyes has been wintering on the lake for some weeks. Locating the bird from approximately half way down the lake, we took some time for everyone to see the bird through a telescope before moving on.

In the fields flanking the lake, we saw Starlings and Redwings feeding on adjacent farmland, and with these just a few Fieldfares. A flock of Lapwings flew up the lake. In wooded sections there were the typical passerines including Goldcrest, Tree creepers and tit species, although many  were recognised by call rather than sight. At the eastern end of the lake we found wintering a Chiff-chaff.  This is the shallow end of the lake which is favoured by dabbling ducks, and we saw Gadwall, Shoveler  and Teal.  Here we also watched several Snipe fly up from the reed-bed.  Finally we visited the old fish hatchery, with inlet stream Mistletoe clad Poplar trees and bird feeders, before heading back to our cars along the lake.

61 species recorded and of these 12 only heard.

Picture of a Wood Mouse in my back garden on the peanut feeder, which I took on 5th Dec. this year.
.

Already sent the record to Nats as a 2014 mammal record, the last Wood Mouse I saw in my small Oldfield Park back garden  ( on the ground ) was a couple of years ago.
Thank you Geoff
Posted by steve curtis at 9:11:00 am No comments:

Hi all, has anyone seen Marsh or willow tits on Bannerdown common lately, if so will you please leave a message in the comments box below, thank you.

Comment box link
All the best Steve
Posted by steve curtis at 12:40:00 pm No comments:

“I had a lucky sighting of an otter in the River Avon at about 11am on Sunday 30th November.
I simply stopped on the bridge, heading for the London Road, just to look for any Little Grebes or Moorhens in that patch and was amazed to see an otter swimming quite fast, its head clearly visible out of the water, and heading for the south bank (Kensington Meadow side). I saw it quite clearly without binoculars as it moved along toward the bridge, keeping very close to the bank. It soon dived and I waited for a few minutes, including looking over the other side of the bridge but there was no further sign of it.
My only other local sighting has been one in the river at Batheaston many years ago.
Thanks,
Lucy Delve
Please could Nats members send me their written mammal records for 2014, by e-mail, with all necessary information, such as date, location and grid reference, by 12 January 2015”.
Posted by steve curtis at 3:34:00 pm No comments:

Twerton Roundhill and the Englishcombe valley

Fifteen people turned up to Mount Road under threatening skies for this general
interest walk on the Southern edge of the city.

A short steep hike to the top of Roundhill got us off to an energetic start and
gave ample opportunity to savour the amazing panorama and view the valley
into which we would shortly descend. For many this was their first visit to the hill
and I implored them to visit again in the summer when the hilltop will be a rather
beautiful and diverse meadow. While some admired the hedgerows, heavily
laden with hawthorn berries and common lichens, a late active slow worm was
found on the adjacent grassy slope.

Heavy rain throughout the previous twenty-four hours had necessitated a change
of plan from the steep paths towards woodland as the clay terrain had become
treacherous, so we instead proceeded down to a lane-based route that afforded
some captivating views of the Englishcombe landscape and opportunities to
consider the history of the area as the industrious site of Ware’s Nurseries.

Notable species first began to appear as we passed between farm buildings on
the approach to a majestic avenue of hornbeam. Here, a large retaining wall
sheltered late-flowering clumps of the very local, introduced Crested Field-
speedwell (Veronica crista-galli) while a leopard slug languished on its stone
face. Birds became more noticeable with calls from mixed flocks of tits along with
goldfinches and goldcrests before attention turned to fungi as we entered the
avenue itself.
A photogenic example of Variable Oysterling (Crepidotus variabilis)
was admired along with the fragrant Soapy Knight (Tricholoma saponaceum) and
the ubiquitous candle snuff (Xylaria hypoxylon). Beside the stream were jelly ear
(Auricularia auricula-judae), Coprinellus domesticus and an unusual fossil
believed to be ancient corals. With time running out attention turned away from
nature to the challenging tromp back uphill to Whiteway Road, but in a final
flourish of interest some path-side wood chippings revealed the rare Redspored
Dapperling (Melanophylllum haematospermum) and a grass road verge some
fine Snowy Waxcaps (Hygrocybe virginea), while both a sparrowhawk and a
kestrel encouraged us back towards Roundhill before the rain returned.