This was the fourth occasion that the Society had met for this scenic walk from The Shallows in Saltford around the medieval ponds to Avon Farm and return via Swineford Lock and the River Avon towpath. It was also the latest date that we had held it and once again we were blessed with fine weather, despite the forecast for it to break during the day and the rather cloudy start.

As previously, Chiffchaff and Blackcap could be heard singing as we left the car park and Blue Tit, Dunnock and Goldfinch were seen as we headed for The Batch. Beyond St.Mary’s churchyard three Linnets showed well to everyone, including a fine male in breeding plumage. Perhaps it was the cooler conditions but bird-song was in short supply as we walked to the medieval ponds, until an obliging Common Whitethroat began to sing and eventually sat up to give everyone excellent views. 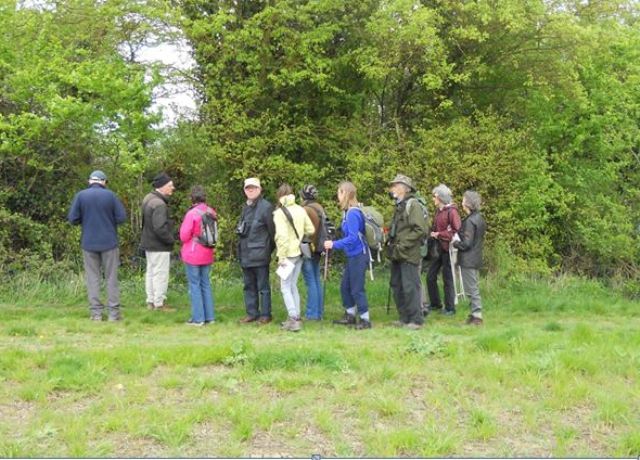 Our President, Alan Rayner explaining the difference between our native
Bluebell and the introduced Spanish variety.


As we approached Avon Lane we finally heard the song of a Lesser Whitethroat but typical of the species, it was well hidden in the hedgerow and only gave the briefest of flight views as it broke cover and was chased off by a male Blackcap. Further up the lane two Sand Martins flew over and Swallow and House Martin were added to our list as we reached Avon Farm.

Gradually the cloud broke and some weak sunshine enticed some butterflies onto the wing as we walked the section to Swineford Lock and the river towpath and these included Orange Tip, Green-veined White, Speckled Wood and towards the end of the walk, two Holly Blues.

A female Sparrowhawk also put in an appearance and two Cormorants were perched in their usual tree on the river bank.  A singing Goldcrest gave very good views over the path passed the Water Treatment Lagoon and the walk concluded with further excellent views of two  Mistle Thrushes on a grassy bank. 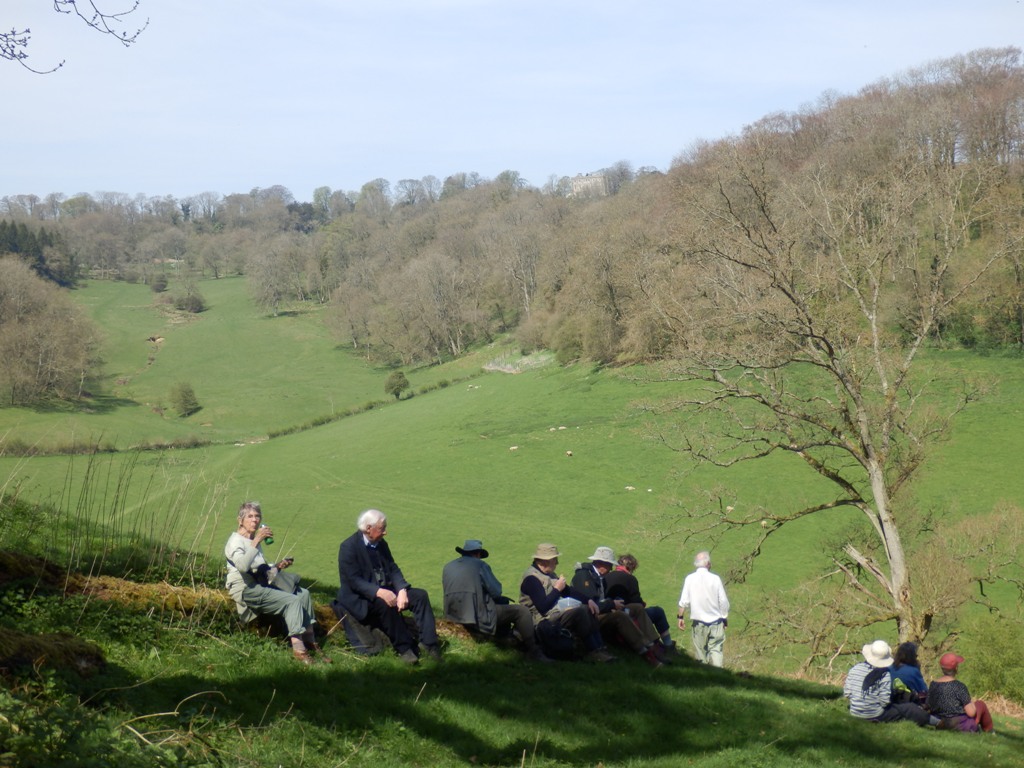 Despite an unexpected road closure affecting the A46, 19 Bath Nats members
assembled in the National Trust car park on a sunny, warm day. Early arrivals had
glimpsed Redstart and a flock of Linnets, whilst later arrivals had excellent views
of a Red Kite.

The path gently descended through mature woodland carpeted in Wild Garlic and
native Bluebells . We paused to listen to the rich birdsong which included
Blackcap, Nuthatch and Coal Tit, and watched a pair of Treecreepers and a male
Blackcap.

The National Trust practice of leaving felled timber in situ provided much
opportunity to discover the fungal diversity on these as well as on the living
trees. A large example of the uncommon Giant Elm Bracket (Rigidiporus
ulmarius) was found at the base of a Horse Chestnut tree.

A small detour brought us to a stunning lunchtime spot with views over a
sweeping valley and accompanied by the calls of Ravens and Pheasants.
Climbing back up the valley, we stopped to admire Town Hall Clock (Adoxa
moschatellina), and some prolific growths of Swan’s-neck Thyme-moss (Mnium
hornum)with its dangling capsules on tall red setae.

The path emerged into damp grassland, where mature Sycamore trees had
abundant epiphytes and logs nearby were colonised with lichens including
Cladonia fimbriata and an introduced species of moss: Heath Star-moss
(Campylopus introflexus) with its strongly reflexed hair points. Soon we were on
the main path towards the house where the new tea pavilion in the garden
provided a refreshing end to a fabulous spring day.


Thanks to Marion Rayner for photos and report