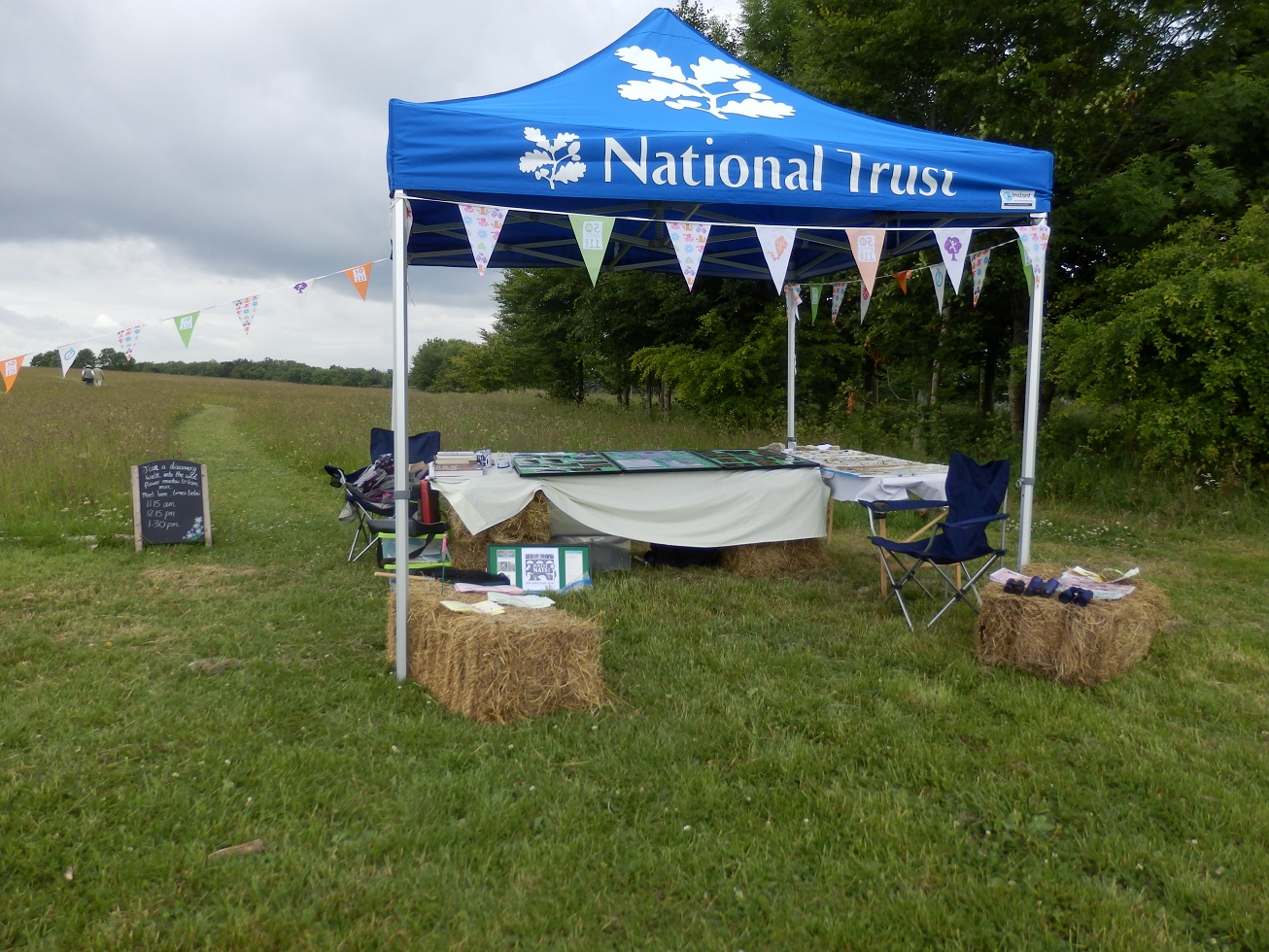 The 12 hectare expanse of Whitefield provided an apt setting for our Summer Nature Weekend of public outreach at Dyrham Park. The flower-rich meadow was full of colour and spectacle, with red clover, lesser trefoil and yellow rattle abundant amongst the swaying knee-high grasses, predominated by crested dog’s-tail. Misty pom-poms of goat’s-beard decorated the sward at remarkably evenly spaced intervals. Flowering spikes of pyramidal, spotted, southern marsh and bee orchids, along with common broomrape and tall outbursts of rough hawk’s-beard punctuated the scene, and were made easy to observe close-up from the mown paths cut by the National Trust. Swifts scythed low over the sward while skylarks ascended the air waves.
We set out our display on tables and hay bales underneath the gazebo provided by the National Trust, and waited. On the first day, people were slow in coming – perhaps the slightly iffy weather inhibited them, and, as is the way at Dyrham, the eyes of most visitors were focused downhill towards house and garden, not towards what could be seen just beyond the end of the main car park itself. But a few enthusiastic family groups did make it our way and enjoyed being shown around. 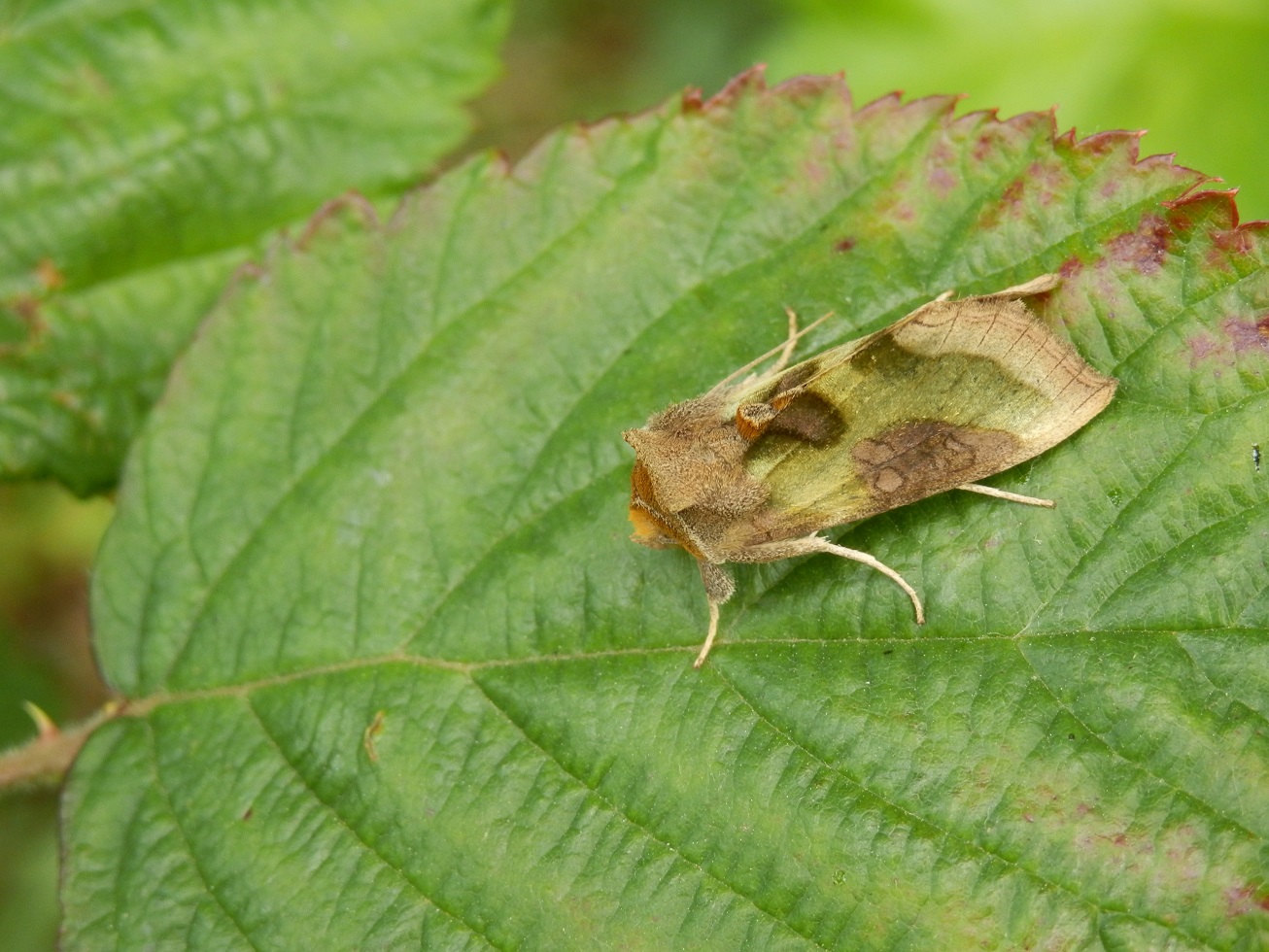 The second day began with a moth-trap opening session, led by Richard Pooley and Paul Wilkins. Almost 50 species were identified, including a beautiful Burnished Brass, which obligingly rested on a nearby bramble leaf after release, allowing visitors to get a close look. The sunnier weather brought more visitors within our vicinity, but as the wind became disruptive during the afternoon we had to pack up hastily. 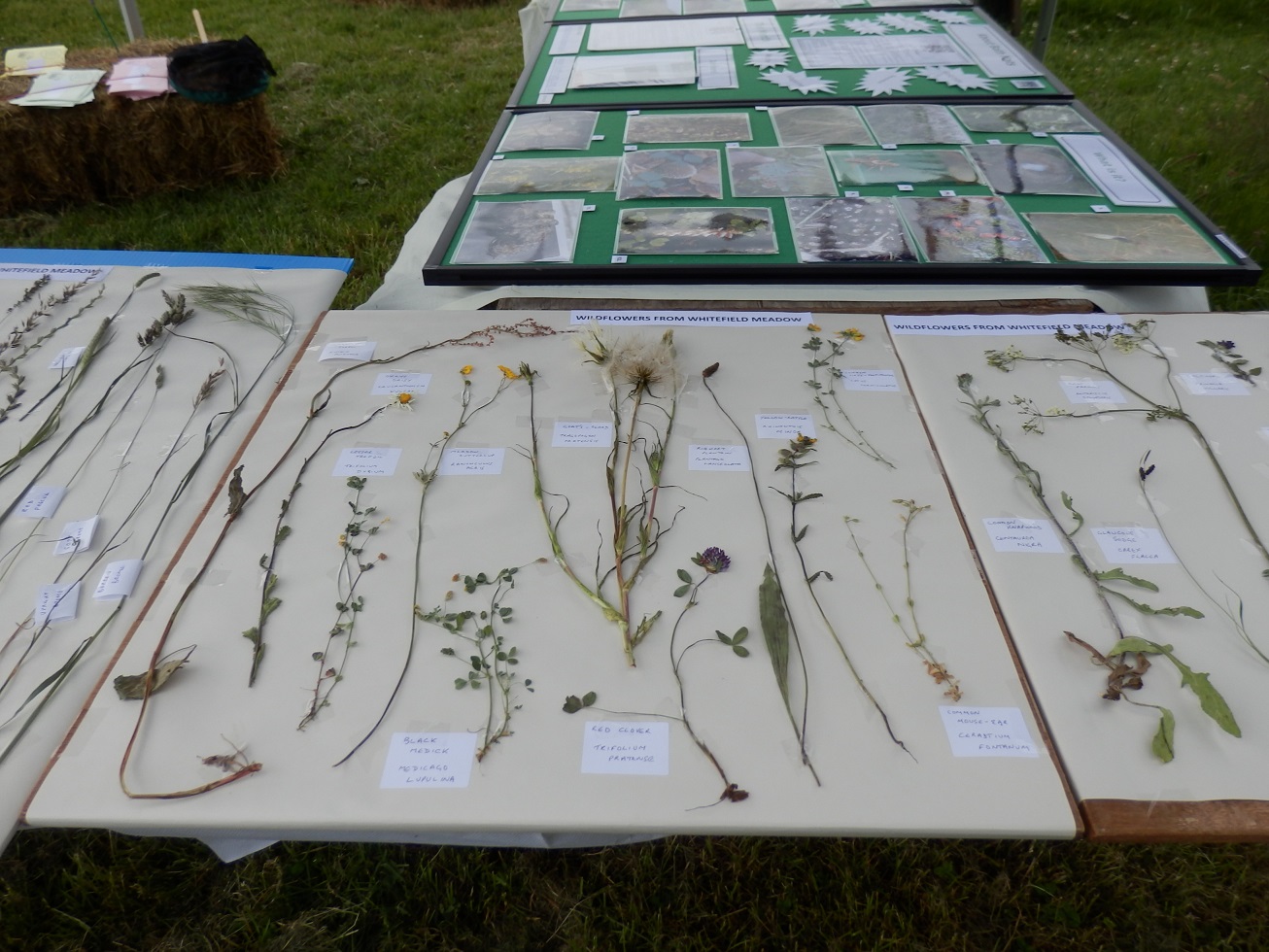 Photographs of orchids by John Garrett


Photographs of display stand and burnished brass by Marion Rayner
Posted by steve curtis at 10:35:00 pm No comments:

Accompanied by birdsong from trees and bushes close by 13 of us met in the George Inn car park at Bathampton for a 9.30 a.m. start. We took a short cut through the wooded churchyard towards the canal, listening to Wren, Blackbird, Goldfinch, Chaffinch and a single Song Thrush. We then walked slowly along the canal towpath towards Claverton Pumping Station in bright sunshine.

Several birds were seen well along the towpath. An active Reed Warbler singing from a small patch of reeds, a Chiff Chaff alternately chasing insects over umbellifer plants, then taking cover in the hedge-line. Blackcaps, a singing male on a hedge, a female with young deep in a Hawthorne bush. A young and vocal Great Spotted Woodpecker that was found at the base of a willow tree and exchanging calls with a hidden parent. Keener eyes spotted a distant Sparrowhawk on the skyline and a few Buzzards floated high above. Unseen Whitethroat and Greenfinch were heard.

We stopped to look at a few insects and plants: on buttercups a beetle with thick thighs Oedemera noblis,

Diverting down a short lane and crossing a railway brought us to Claverton Pumping Station. While Terry Doman explained the workings of the historic pumping station, we looked for dragonfly species by the pump house pool, recording Large Red, Blue-tailed and Azure Damselflies as well as Banded Demoiselle. From here it is only a short walk over a field to the Claverton Weir on the River Avon. Here a Mistle Thrush was singing in the distance and a Green Woodpecker made a short “Yaffle” call. Blooming by the weir was a Common spotted Orchid. Then while a couple of men walked over the weir and began to swim, a kingfisher flew up from the river and away over the field behind us. Having walked slowly here, we returned at a quicker pace by the same route, finishing our walk about 1.30 p.m.

Phillip Delve
Posted by steve curtis at 11:09:00 pm No comments:

Bath Nats was invited, along with other local environmental organisations to take part in this special event which was organised by Cotswold Conservation Board as part of the ‘Save our Magnificent Meadows project’.

Not knowing quite how many people to expect we took the Bath Nats display boards- especially refreshed to include a photo quiz- and also prepared a display of grasses as part of the meadow theme.
After some gazebo construction we were ready for action when a sudden rain shower and gusts of wind blew the gazebo over and gave us a forewarning of the day ahead.  Sunny weather was accompanied with frequently gusty wind and so volunteers Janine and Glen spent most of the day holding onto the display boards and gazebo to ensure they didn’t disappear into the trees!
The day proved popular with local people including many families with small children as there was face painting, bee hotel building, some ponies and also the added attraction of local celebrity George McGavin who officially launched the event.
Our photo quiz and grasses display proved popular and we attracted many people to our stall to talk to them about nature and to lead them on some meadow walks. Paul Wilkins led a walk to look for bugs and the children enjoyed using the sweep nets but were amazed and horrified when they caught a hornet!

For the first time in about 6 years we have heard cuckoos in Sopers Wood,
Charlcombe.

Thank you Sylvia Humphries
Posted by steve curtis at 10:56:00 pm No comments:

Thanks to Phillip Delve for the post.
Posted by steve curtis at 10:42:00 pm No comments: