A genus with a single British and Europeean representative, one of our most distinctive hoverflies - a small delicate species with the most elongate abdomen of any British hoverfly. Comparison is only required with Sphegina species which are somewhat more robust and less elongate in build with projecting mouth edge and rather different wing venation. The taxonomic affinities are with Melanostoma.

One of our larger Oxycera species (wing length to 6mm) with a bold black and yellow pattern. It is one of several black and yellow species with extensively yellow humeri and large spots on the tergites. O. rara vies with O. nigricornis as the most widespread and frequent Oxycera in southern Britain but becomes scarce in the north and west. It occupies a much greater variety of habitats than other Oxycera species. This includes seepages, ponds, ditches and wet meadows, though it is not especially characteristic of large wetlands or swamp and often turns up in association with hedge ditches.
The larvae have been found in moss and mud of water margins and seasonally-flooded places. They can be keyed out using Stubbs & Drake (2001). Adults peak in June and July and are most easily found by sweeping, though can sometimes be observed sunbathing on low foliage such as bramble leaves.

Steve Curtis
Posted by steve curtis at 9:44:00 pm No comments:


A predatory brown lacewing in woodland near Brown's Folly, outside Bath, UK. This possible identification is based on the presence of an adult nearby - not exactly infallible.

A predatory brown lacewing in woodland near Brown's Folly, outside Bath, UK. This 8mm long insect is identified by the pattern on the wings.

Thanks to Ian Redding
Posted by steve curtis at 9:07:00 pm No comments:

A few from my Batheaston wildlife garden.

Eristalis arbustorum (Plain-faced Dronefly)
A widespread and common small Eristalis found in a wide variety of habitats. It is rather variable in appearance and can be confused with E. nemorum and E. abusivus. Both sexes have a dusted face lacking a median stripe (in contrast to interruptus) and the thoracic dorsum and tips of the mid tibiae are darker than E. abusivus.
In the male, the dark area in the middle of tergite 2 does not usually extend along the hind margins to isolate the yellow spots as in E. nemorum, though male abusivus (with aristae pubescent rather than plumose) can look very similar in the field. Variable amounts of yellow can be present on the 3rd tergite.
Females of arbustorum can have tergite 2 broadly yellow at the sides or all-dark and are much more difficult to distinguish from nemorum (which has wing stigma squarish and strong facial stripe) or abusivus (pubescent aristae, more strongly marked thorax, mid tibiae with pale tips).
The flight period extends from April into autumn, and the rat-tailed larvae have been found in a variety of organically-rich waterbodies and liquids.

First ever in my garden - and the first Skipper seen there for over 9 years. 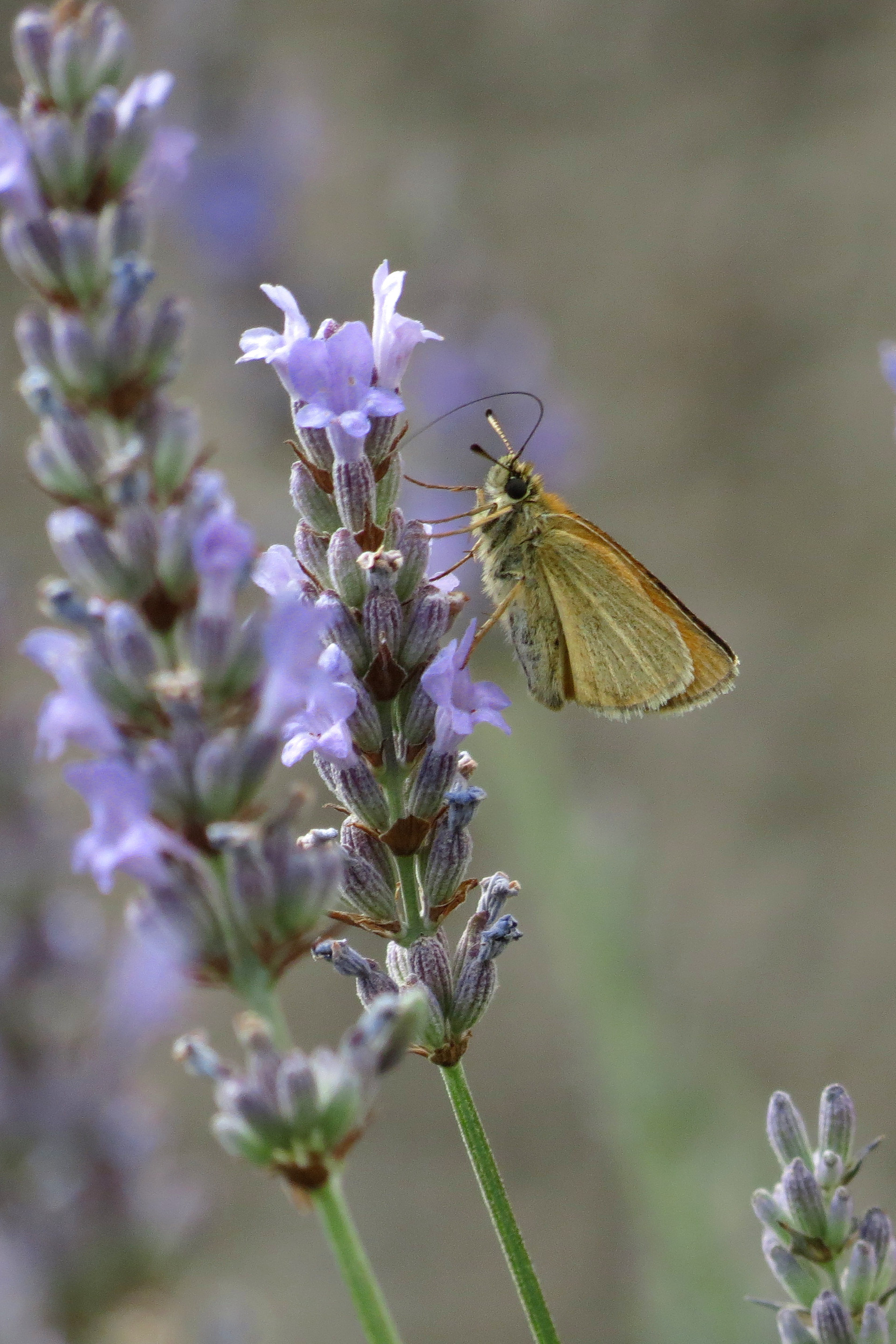 Thanks to Ian Redding
Posted by steve curtis at 5:31:00 pm No comments:

Thursday, 23/7/15, attracted to a pheromone lure kindly given to me this morning by Paul Wilkins at the Moths SIG meet held this morning.

click to enlarge
Thanks to  Chris Woods
Posted by steve curtis at 1:06:00 pm No comments: 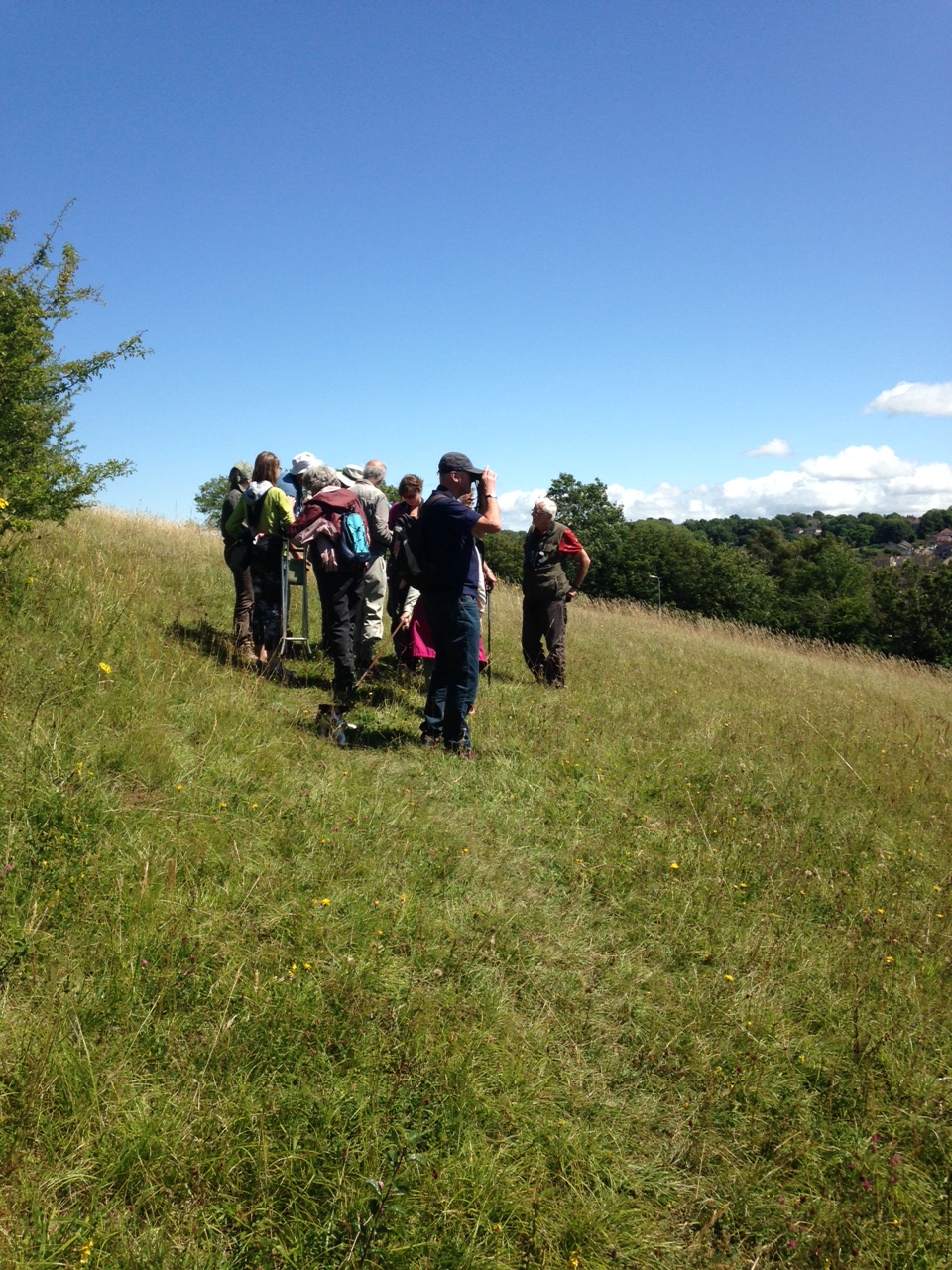 After a wet few days the weather was kind on this summer afternoon on Roundhill. Many of the faces were familiar from our November visit, but the plan was vastly different as the biodiversity of the season called for a complete two hours on the hill itself.

After briefly pausing to view the new interpretation board and consider the human history of the area, we proceeded slowly up the Eastern slope; characterised by dense grasses, Crow Garlic and swathes of Agrimony and Ribbed Melilot. Small Skippers were in good numbers, with at least one Large Skipper, and a possible Tree Bumble Bee. Midway we ventured off the path to view Pyramidal Orchids; well past their best but worth looking out for in future springs. As the vegetation became more balanced the Red Clover and Knapweed (Lesser and Greater) became more prominent and consequently Marbled White, Meadow Brown and one Ringlet were seen. Further butterflies, including Peacock and Painted Lady, provided quite a distraction to many of the group looking down Southwards from the summit, while others were here fascinated by the amazing clarity of the freshly cleared skies; affording detailed views of many Bristol landmarks and the Brecon Beacons.

Here, Glen showed a selection of moths trapped the night before in our nearby garden. They included Dark Arches, Buff Ermine and Large Yellow Underwing[*]. For those of us who like the show-stoppers, Large Elephant Hawk moth and the incredibly twig-like Buff Tip were just the ticket.

With all the moths released we dropped down onto the South-Western slope of the hill, by far the
most species-rich section, with encouragement to explore at ground level. A cool and dry spring was possibly the reason behind much sparser grass than in previous years and concurrently greater quantities of Yellow-Rattle (now in seed), Bird's Foot Trefoil, Hedge Bedstraw, Lady's Bedstraw and Dwarf Thistle (coming into flower). Fairy Flax and Common Centaury made a delicate appearance to the keen observer, and Field Scabious hosted the occasional Six-Spotted Burnet (sadly not doing well here this year).

Glen's moth pots came in handy for the capture and inspection of the orthoptera that are especially prevalent on this hill. With some assistance from my able and determined son, we were afforded views of Roesel's Bush Cricket (long-winged and short-winged forms), Meadow Grasshopper and Field Grasshopper. Admittedly a clear identification could not be reached until I later brushed up on my knowledge of pronota; had my ID skills been up to scratch I may have also been able to confirm Common Green Grasshopper - which I later found to be evident on those slopes.

A handy piece of discarded flooring, known to frequently host interest, revealed a large female Slow Worm, before Glen rounded off the trip by capturing a strikingly beautiful moth for us all to view; it turned out to be Nemophora metallica.

Footnote: [*] It is believed we also had a Four-Spotted moth (Tyta luctuosa), though having since discovered the status of this species we are seeking to verify this.
Posted by steve curtis at 7:53:00 pm No comments:

A group of 16 of us, both young and not so young, gathered at Bath City Farm on a bright, warm evening following heavy rain earlier in the day. Although we were smaller in number than hoped, we enjoyed a convivial evening together , which lived up to its billing in terms of what we saw, heard, smelled and tasted. Paul Wilkins, Phillip Delve, Marion Rayner and I all brought examples of our artwork, and enjoyed engaging in conversation about them. Phillip Delve and Paul Wilkins brought in some spectacular examples of moths trapped beforehand, and these were especially admired by the children present, as was the display of grasses and picture quiz brought in from recent outreach events. A raffle was held and numerous prizes, from books to bottles, won, Swifts screamed through the gathering dusk, and we watched a spectacular sunset, after which numerous bats started to make their appearance as we made our departures.
Alan Rayner

The day started bright, still and warm, but some showers developed during the afternoon of this annual event in which Bath Nats members participate. Alan and Marion Rayner set up and attended the Bath Nats stand. Alan led two guided walks for the public. ‘Walk 1’ took a group of around 20 people along a shady path, banked by shade-tolerant grasses (wood false-brome and hairy-brome) and abundant Bath asparagus out into colourful species-rich calcareous grassland with plentiful pyramidal orchids and woolly thistles. Here, marbled whites, meadow browns, ringlets and small skippers were the most frequent butterflies seen, some of which were briefly caught and examined in Alan’s butterfly net – much to the delight of children present – before being released. A patch of nettles was covered in small tortoiseshell caterpillars. Returning back along the woodland path, two beautiful scarlet tiger moths attracted our admiration. ‘Walk 2’ in the ‘Wild Flower Field’, with a small but enthusiastic group was curtailed by rain, but brought additional sightings of  yellow wort, as well as large groups of pyramidal orchids.
Alan Rayner

Photographs by Marion Rayner:
Posted by steve curtis at 12:50:00 pm No comments: