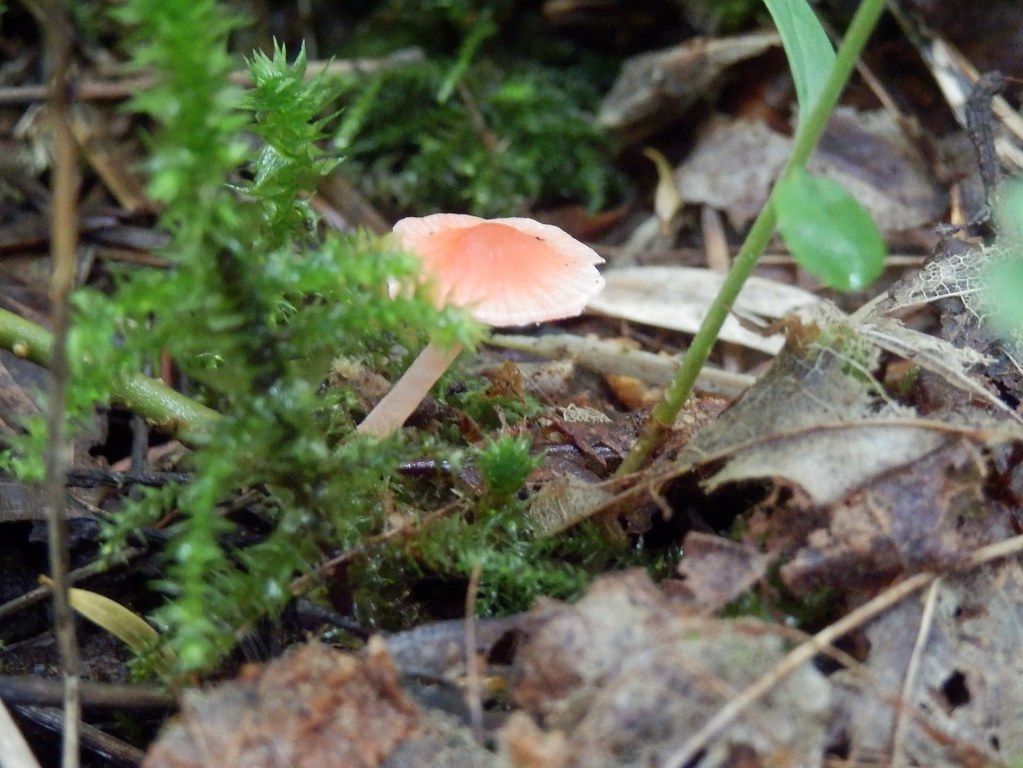 Judging by the number of fungal fruit bodies I have been finding popping up recently in local woods, fields and lawns, it’s almost as though autumn is already with us! Amongst these have been a very special and beautiful find, in Gully Wood, near Bathford. This is the seldom-recorded ‘Scarlet Bonnet’, Mycena adonis var. coccinea. Here are two photographs of it, taken by Marion Rayner. The first shows it as we found it growing amongst moss and leaf litter. The second shows it after cleaning back home. The red cap and pink stem are diagnostic.
------------------------------------------------------ 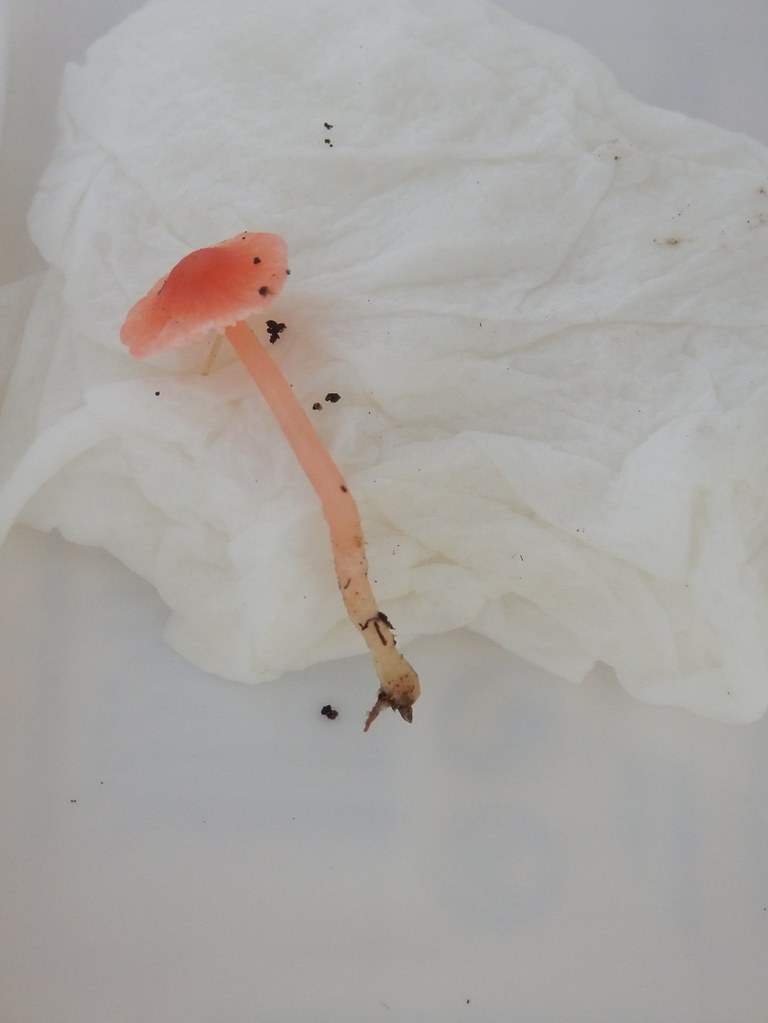 Warmest
Alan
Posted by steve curtis at 9:14:00 pm No comments:

Wildlife Safari including a close up with Moths, Led by Kate Souter with Richard Pooley
As part of the celebrating  25 years of gardening at  The Bath Organic Community Garden (BOG) Bath NATs had the chance of an early morning visit to the garden which is found  near Victoria Park.    Together with volunteers from BOG we explored a green urban space dedicated to nurturing the soil and the flora and fauna that benefit from an organic approach to horticulture.
Richard Pooley guided us through the moths that we might find active at night in an urban garden nearly.  It was with some fascination that the group examined the moths close up. Of the twenty different species found there were 16 macro moths.  Treble Lines, Charanyca grammica, was by far the most commonly found. Greater Plantain, Plantago major, is its food plant of choice; one reason for being an ‘untidy gardener’? Buff-tip, Phalera bucephala, disguised as a birch twig was admired for its sophisticated camouflage.  Younger participants were fascinated by the May Bug, Melolontha melolontha, a serious pest of arable crops but now a much rarer sight as a result of the use of pesticides.
Participants then visited the diverse range of habitats that are found in just one acre of land. The woodland area affords a space for herbs such as Lungwort, Pulmonaria officinalis, and Herb Robert, Geranium robertianum, the crushed leaves of which make a good a midge repellent. The pond is a haven for invertebrates including dragonfly and damsel fly nymphs.  The Common Darter, Sympetrum striolatum, was spotted as the sun came out.  The orchard provides shelter and food for a range of vertebrates including Britain’s smallest breeding bird, the Goldcrest, Regulus regulus.   The Teasel, Dipsacus fullonum favoured by Goldfinches, Carduelis carduelis, in the winter months, was a focus of some discussion. Interestingly its leaf arrangement which results in small water pools around the leaf axils is thought to be a strategy for gaining nutrients as unwary flies that drown decompose!
Thanks go to Richard Pooley and the BOG for hosting the morning. Further information can be found about the garden at www.bathorganic.org.uk 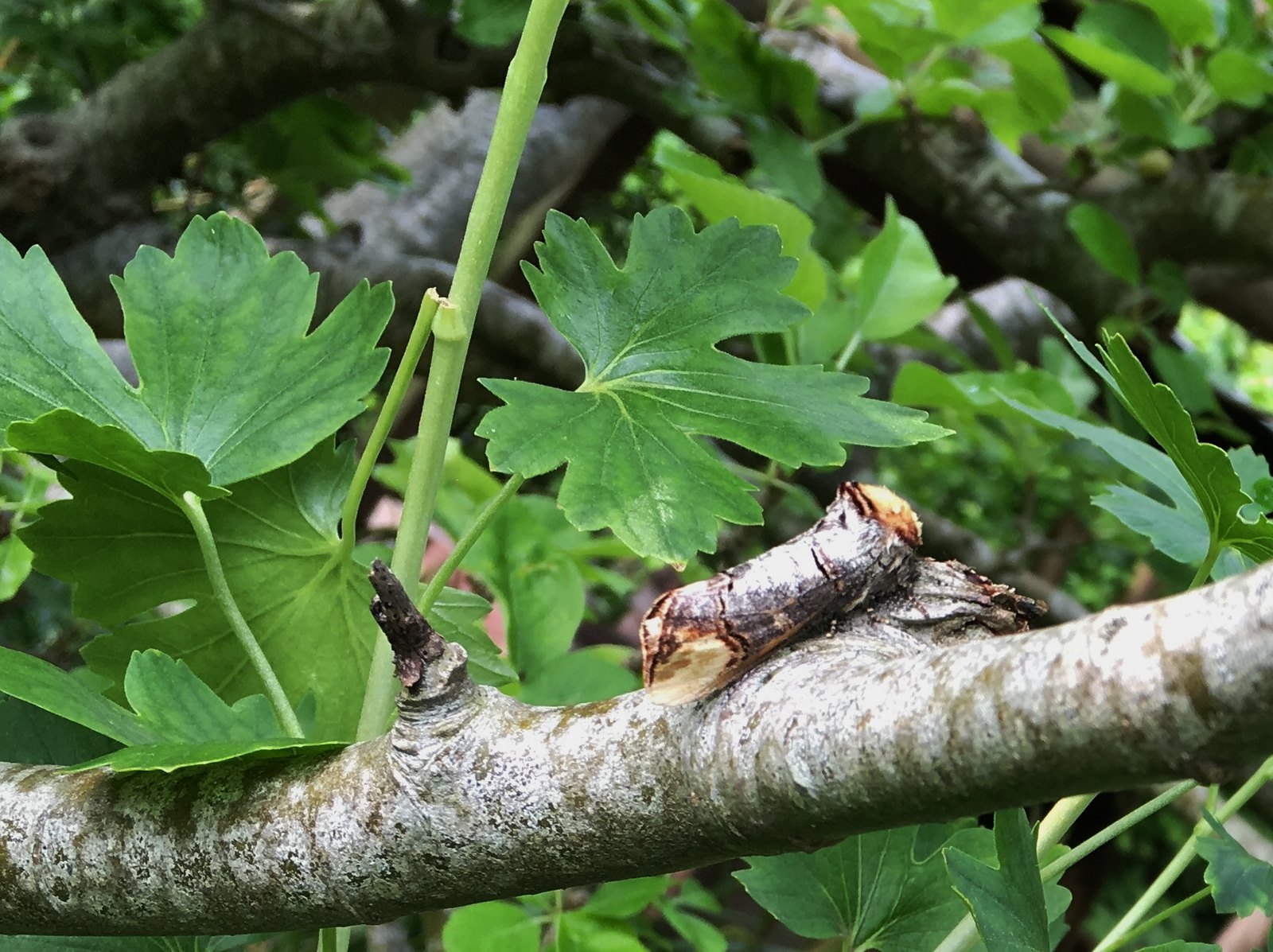 Here are some shots taken by me of Cottony Cushion Scale insect  (Icerya purchasi) on the trees outside back of M&S in Bath today.
Best wishes
Marion Rayner 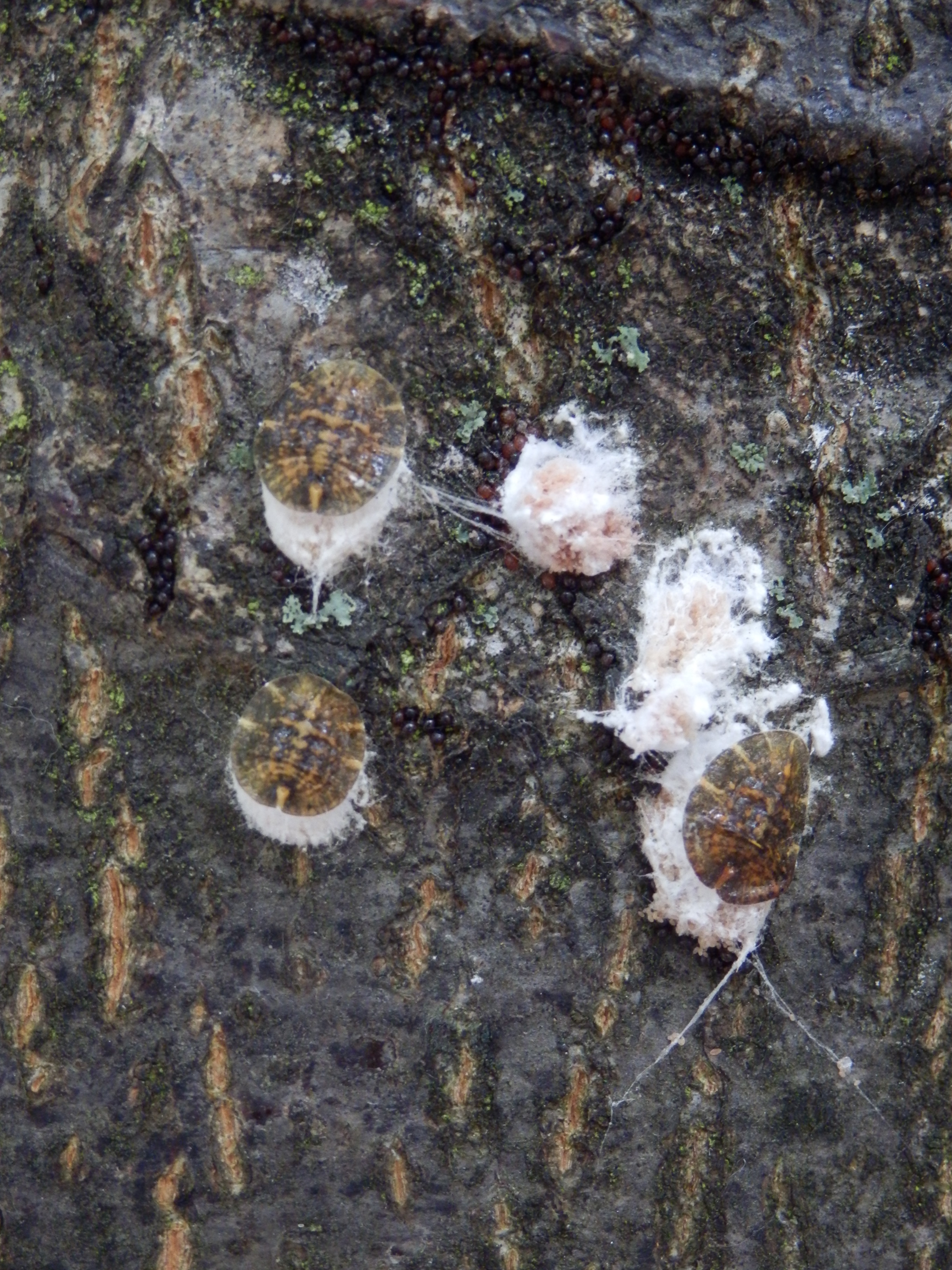 This scale infests twigs and branches. The mature hermaphrodite is oval in shape, reddish-brown with black hairs, 5 mm long. When mature, the insect remains stationary, attaches itself to the plant by waxy secretions, and produces a white egg sac in grooves, by extrusion, in the body which encases hundreds of red eggs. The egg sac will grow to be two to three times as long as the body. Newly hatched nymphs are the primary dispersal stage, with dispersion known to occur by wind and by crawling. Early stage nymphs feed from the midrib veins of leaves and small twigs, and do the bulk of the damage. At each molt, they leave at the old feeding point the former skin and the waxy secretions in which they had covered themselves and from which their common name is derived. Unlike many other scale insects, they retain legs and a limited mobility in all life stages. Older nymphs migrate to larger twigs and eventually as adults to branches and the trunk. Their life cycle is highly temperature dependent, as the length of time in each stage of life is longer in cold temperatures than high temperatures.
True males are uncommon to rare overall, and in many infestations are not present. Pure females are unknown. Self-fertilization by a hermaphrodite will produce only hermaphrodites. Matings of a male and hermaphrodite will produce both males and hermaphrodites.[4]
In addition to the direct damage from sap sucking, the insects also secrete honeydew, on which sooty mold often grows and causes further damage to the host plant. Some ants will also consume this honeydew. 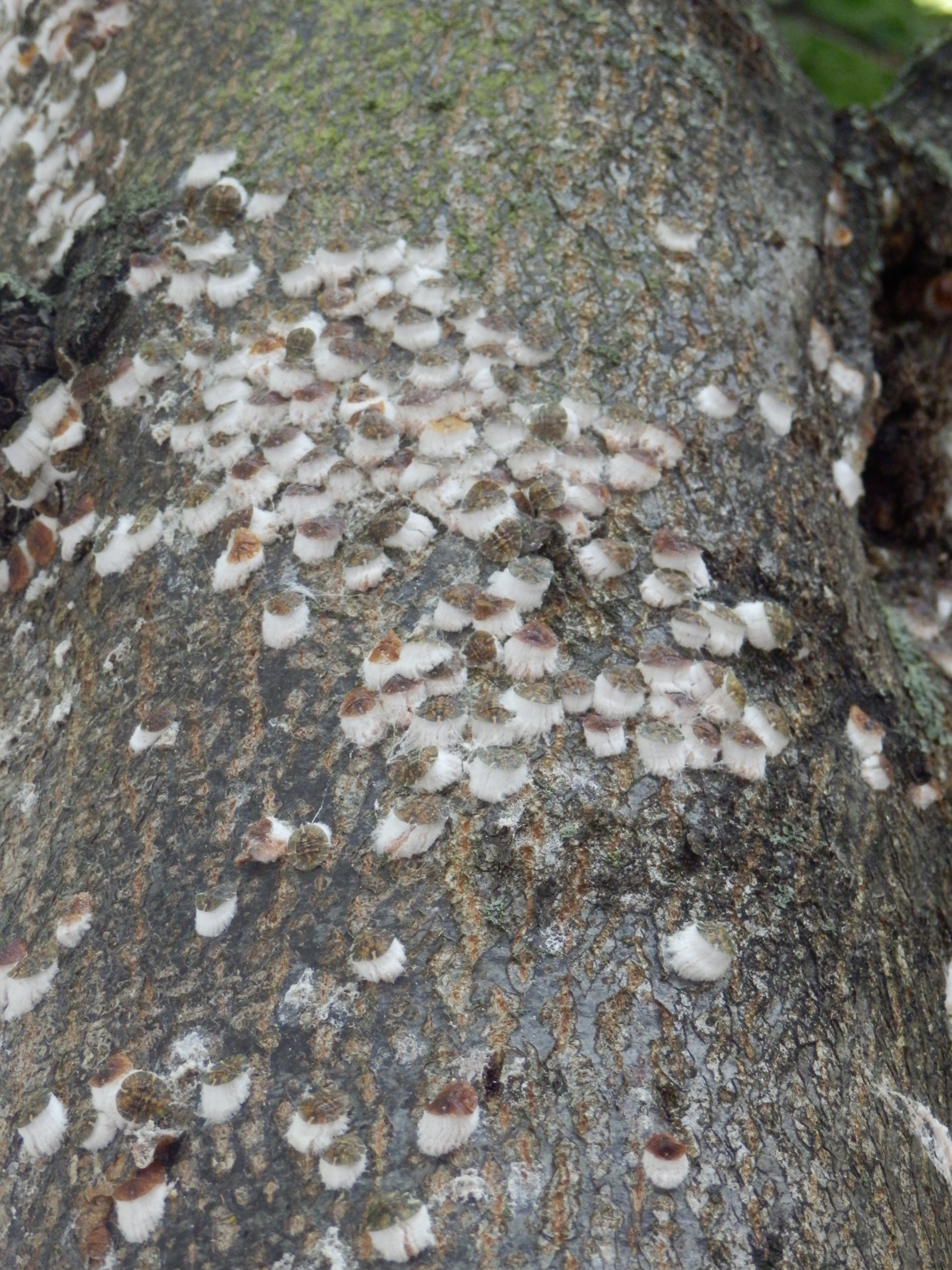