I saw the Hedgehog in my garden one evening this week.  A neighbour said it was one of six he had in his garden earlier this year and he calls it/him/her Fred! 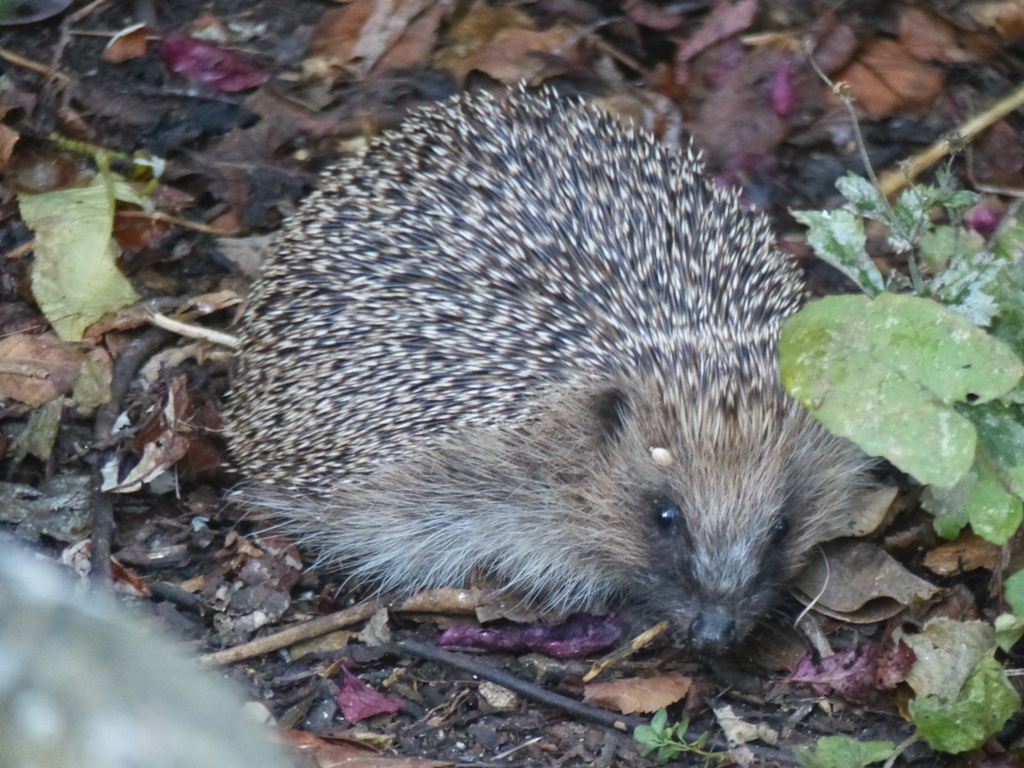 Andrew Harrison
Posted by steve curtis at 8:27:00 pm No comments:

Otter in Bath on 26th July

On visit to Bath today -26th July - we were looking along the Avon at the railway bridge opposite Royal Mail , for the peregrines , and looking down into the shallows at numerous fish swimming amongst the discarded shopping trolleys . We then saw an otter eating a fish on a ledge about 3 metres below us . Really excited as the first wild otter we had ever seen. Sadly no phone to record it. When it had finished it sank back into the water and we watched the bubbles as it moved towards the middle but it never re appeared . 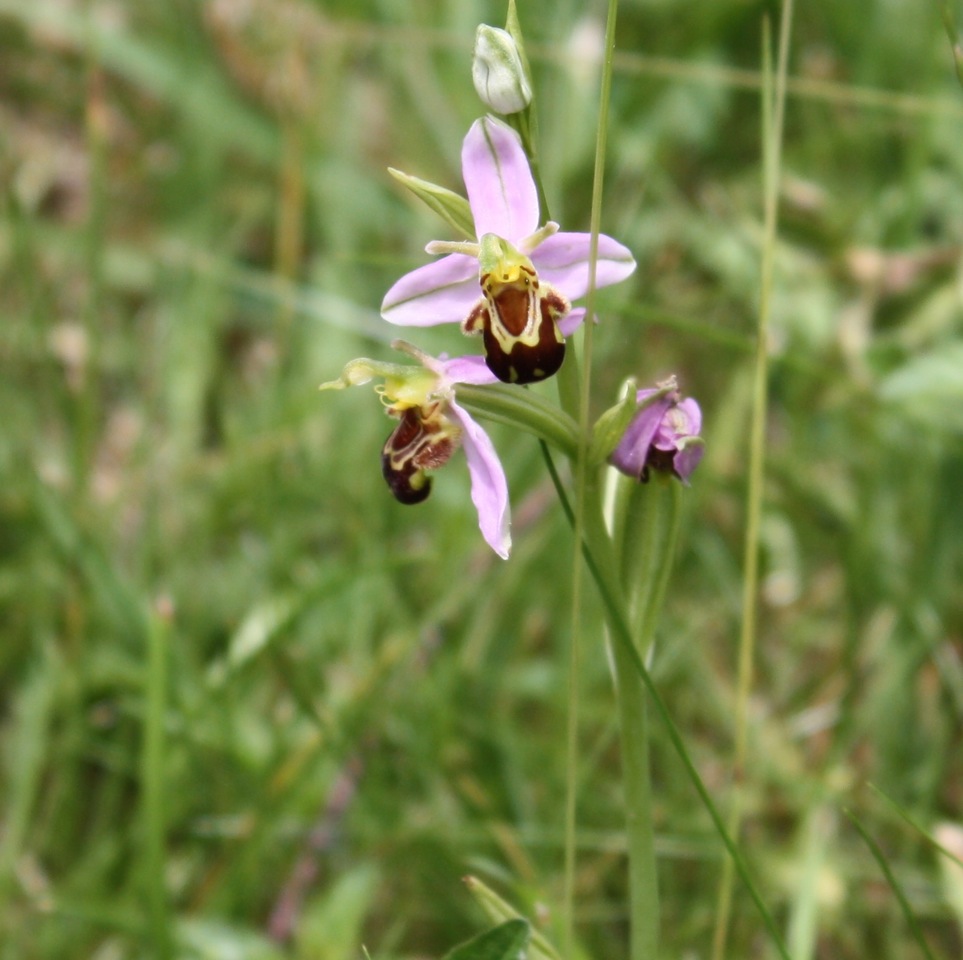 This meeting, a follow-up from April 2014, was attended by 12 members and one grandchild.
Despite the ominous forecast the morning was dry and warm but overcast. We had a circular walk with a variety of habitats including shaded woodland and open meadows, providing some diverse
wild life.
We started with the viewing of a deep badger excavation of a bumble bee nest in the lawn at
Rowley House. We also examined a multi-use nesting box: firstly a blue tit nest which was predated by a great spotted woodpecker, built in by a wren and then used by tree bumble bees. A puzzling and unexpected toadstool on the lawn was later identified by our president as Agrocybe pediaides or
common fieldcap. This is not common and not in our Collins “complete guide “. A Dryad’s
saddle ( Polyporus squamosus) was more easily identified. The smut fungi on false oat grass and red campion were also fascinating as were galls on lime and sycamore leaves, which were the result of microscopic mite activity.
The rest of the morning provided a variety of grasses and flowering plants as well as
bryophytes, the latter recorded by Marion Rayner as part of her contribution to a bryological atlas of Somerset.
The many flowers included Bath asparagus, white and black bryony, sanicle and 4 species of orchid :
pyramidal, common spotted, bee (only 1specimen) and a little treasure, bird’s nest orchid, found by Terry Dolman under beech trees where it was difficult to spot. The mosses
were remarkable as always though it remains difficult recalling their names. 21 species of
bird were recorded but only a handful of butterflies and moths.
Sadly the 2 1/2 hours went too quickly as each subject needed a morning to itself.

Thanks to Rod and Liz 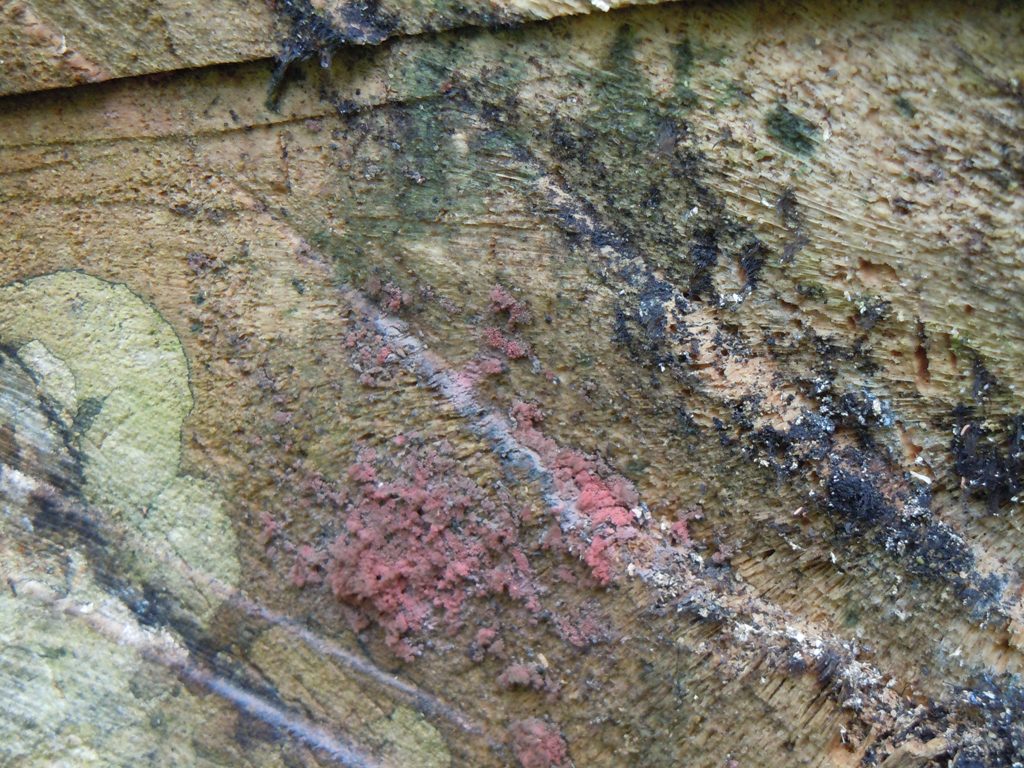 This might be of interest to the members?
The weather being warm and wet (summer!) it is also a good time to find myxomycetes (other than outside the Podium!).
On my regular walk at Newton St Loe I have this week found two species of myxomycete fruiting on old very large pine logs. I attach pictures which need to be magnified slightly to show the species better.
1. Cribraria argillacea is a series of cups on stalks from which the spores have blown away through the overarching (peridial) net which is not very evident (two photos).
2. Arcyria affinis looks like a gathering of bright pink loofahs from which the spores can be seen to be released.
The interest in these two species is that they are exiting the logs from the end since a plasmodium (blob!) can travel through anything its nuclei can pass through and therefore the xylem vessels of the log represent a nice wide highway to travel down but moving outside (laterally) through the xylem walls is much more difficult.
For really good pictures of these species just google the names of look on The Eumycetozoan Project website (University of Arkansas) 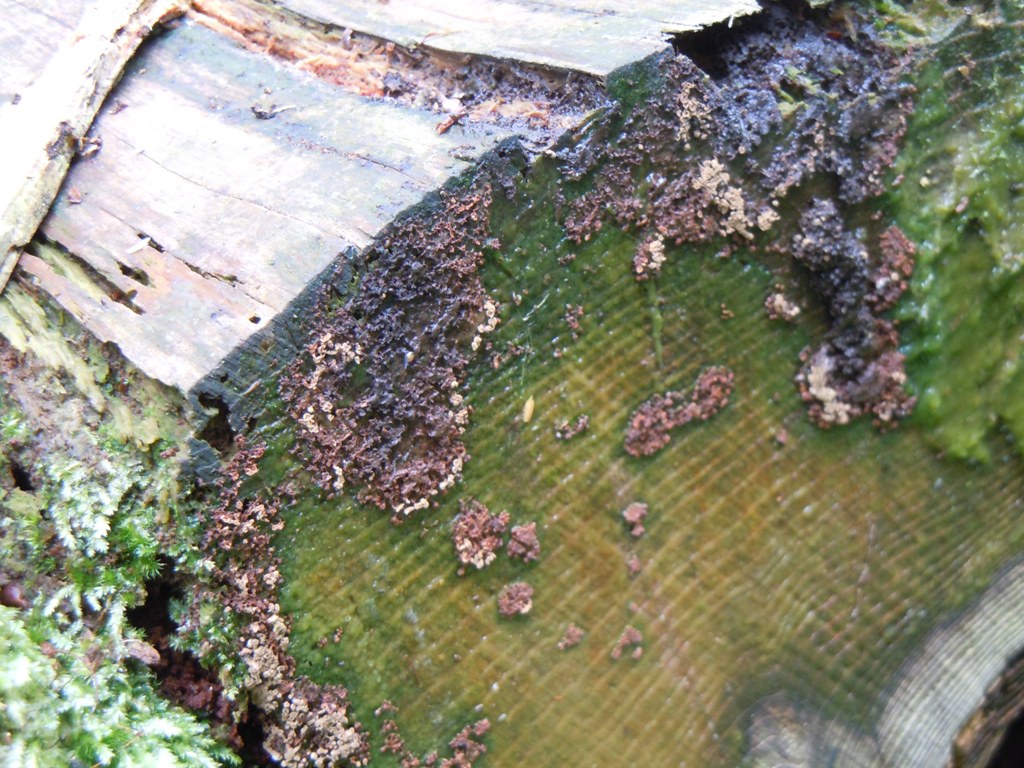 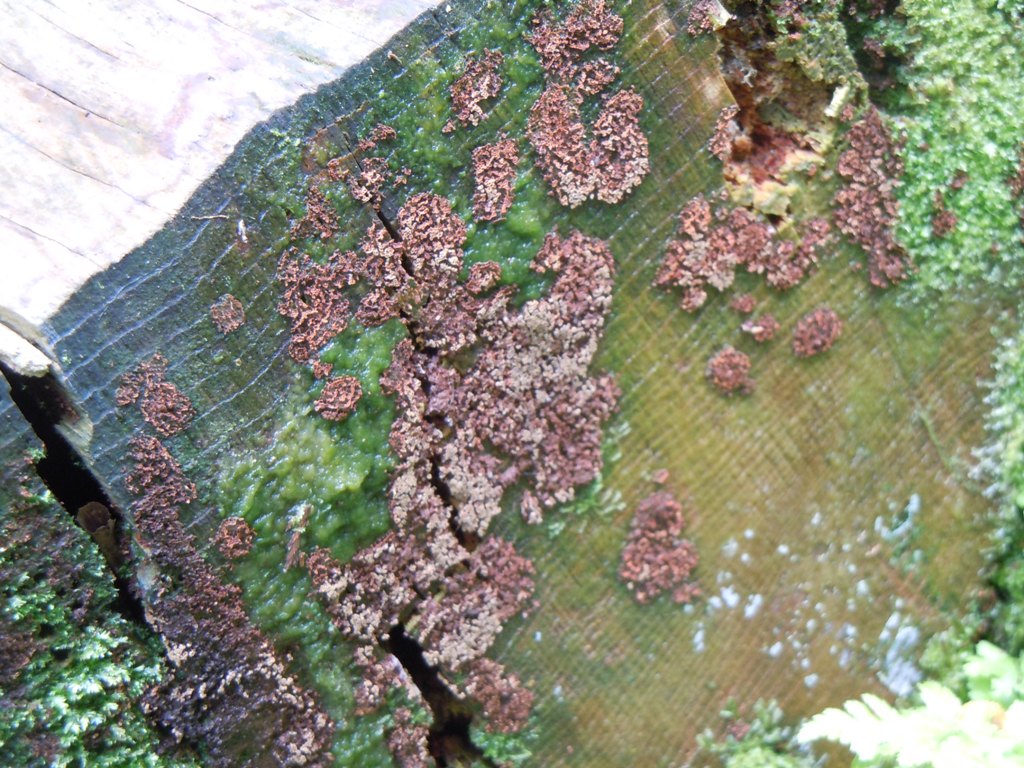 Wildlife Walk’ at the Bath Festival of Nature 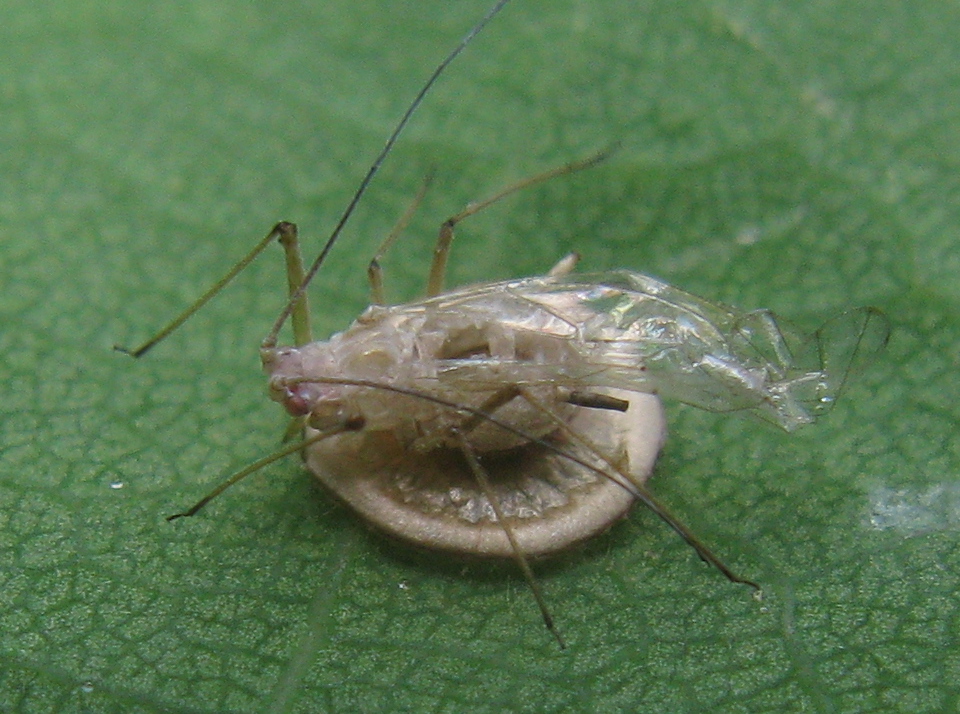 Our ‘Wildlife Walk’ at the Bath Festival of Nature, 25th June 2016
As part of Bath Nats’ contribution to this year’s Bath Festival of Nature in Royal Victoria Park, Marion and I led a group of members of the public on a short ‘Wildlife Walk’ around the area in the vicinity of the Bandstand, where the event took place. At the outset I made a promise to everyone participating, that they would see something they’d never seen before. Little did I know that promise would apply to me and Marion, too! We started the walk by spending some time examining the growth of lichens, liverworts and mosses on a nearby tree trunk, and noticing how the distribution of this growth was affected by moisture drainage from the canopy. Nothing new for us, but something new for most of the group. Next we examined the leaves and bark of a nearby lime tree. On the leaves we found three different kinds of galls: patch galls caused by the mite, Eriophyes leiosoma; nail galls caused by the mite, Eriophyes tiliae, and pimple galls caused by the midge, Didymomyia tiliacea. On the trunk we found some Cottony cushion scale insects, Icerya purchasi, looking a little like squashed cream buns. Next we visited a grassy sward where some Hoary Plantains were producing their characteristic sparkler-like flowering spikes, with ascending arrays of whitish flowers and pale lilac stamens. After several further stops to examine newly formed cones of Blue Atlas Cedar and a variety of grasses, including Festulolium loliaceum, a hybrid between Rye-grass and Meadow Fescue, we arrived at an oak tree, where a surprising find awaited us. Examining the undersides of the leaves, we quickly found what we expected, by way of the curious spiky white egg sacs of a tiny spider, Paidiscura pallens, but in addition to these were some little disc-like structures, each of which had the carcass of an aphid attached to it. After several wide-of-the-mark misidentifications, we eventually identified these as being produced by a tiny parasitic wasp, Discritulus planiceps, whose larvae leave the hollowed shell of the aphid from below, to pupate in a disc-like cocoon. After several more stops, we ended the walk with a visit to a Round-leaved Cranesbill plant to admire its spectacular maypole-like fruits. I think a truly eye-opening experience was had by all present.
The Festival of Nature Event itself was very successful for Bath Nats, despite ending literally with a thundery bang and downpour. Our display stand attracted many visitors and good conversations, and sixteen new members signed up. Thanks go to Alan Feest, Janine Scarisbrick, Glen Maddison and Rob Randall for their help looking after the stand, and to David Goode, who led another Wildlife Walk during the afternoon. 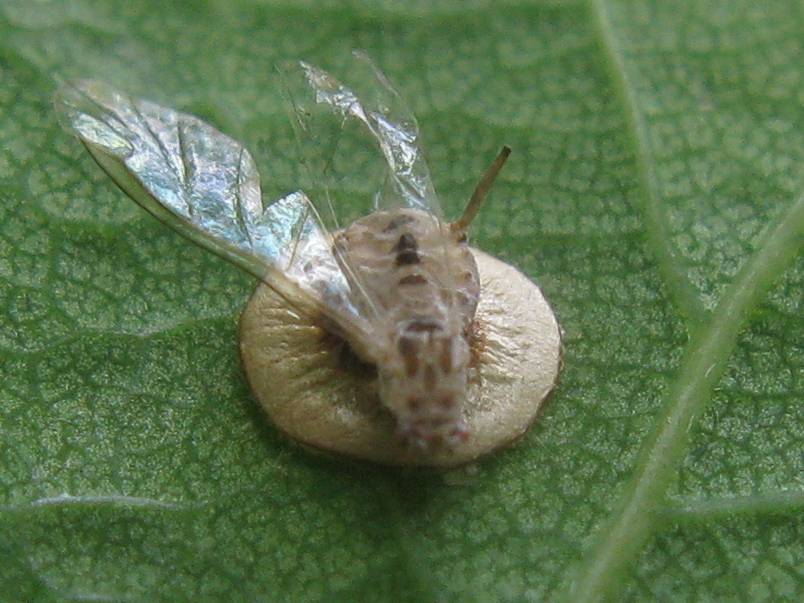 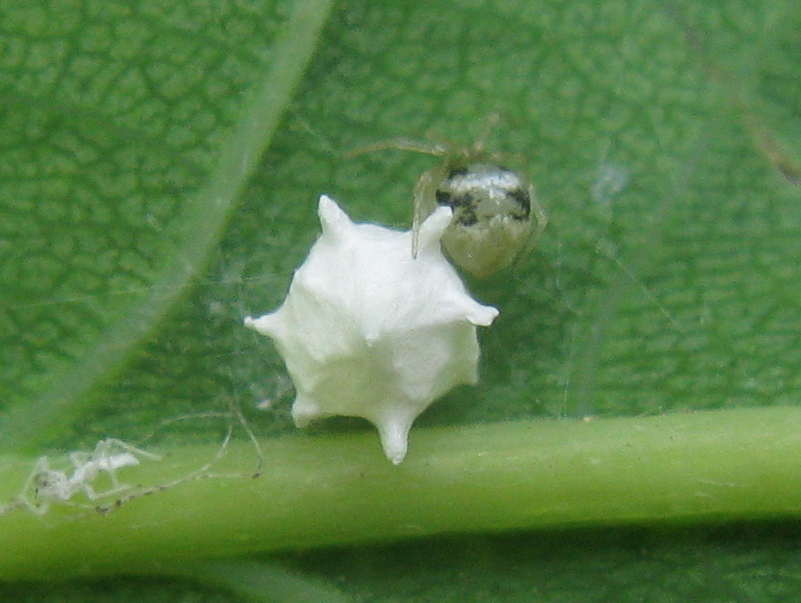