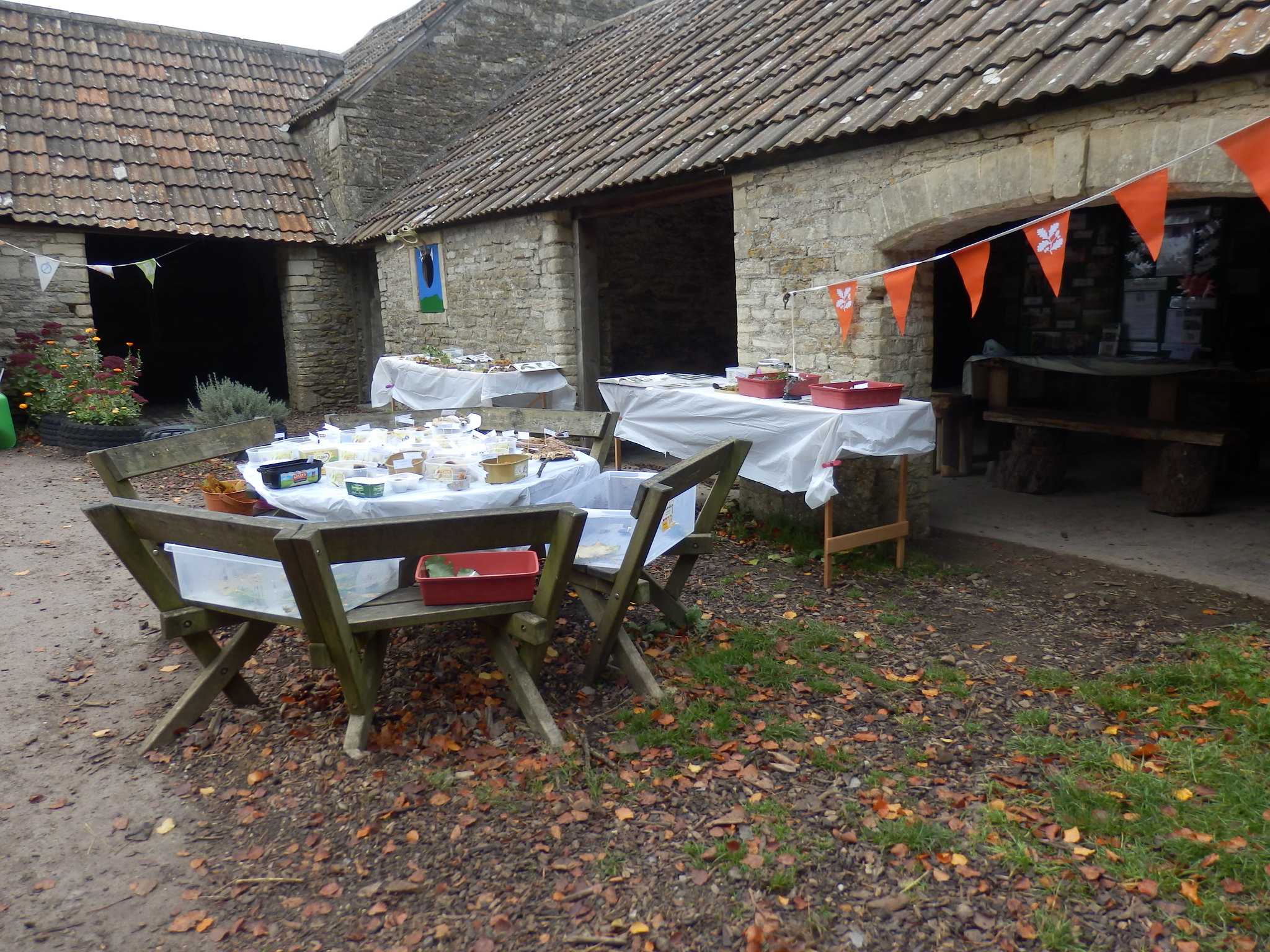 After a cold, misty start, the day became gradually clearer and brighter, but with an increasing breeze. Marion and I arrived at 9 am and were driven down to the Old Lodge by Beth Weston, to set up our Bath Nats display. As in previous years, we brought a large display of fungi (over 50 species) and Bryophytes (around 30 species). On this occasion we also brought a display of Fruits, Nuts and Galls. John Garrett, who arrived at around 10 am to help (thank you, John!), was pleased to find that he could readily identify all of these both in Latin and English, on account of the labels we had attached to them. We welcomed many visitors to the display, most of whom seemed duly impressed by the variety of what was on show. At 2 pm I was due to lead a 1.5 hour Fungus Walk around the Park. What must have been around 60 people turned up, making me feel a bit like the Pied Piper as I led them all off into the Valley where a fairy ring of Parasol Mushrooms (Macrolepiota procera) at different stages of development from ‘drumstick’ to fully expanded awaited our attention. Then it was off for a further walk through the woodlands and wood pasture. Although fungi were a little few and far between, due to the relatively dry conditions, there were still sufficient for me to explain the basic principles of fungal ecology and identification. Amongst those we came across were Deer Shield, Stubble Rosegill, Rooting Shank, Lawyer’s Wig, Weeping Widow, Beech Woodwart, Beech Tarcrust, Clouded Funnel, Turkeytail, Smoky Bracket, Shaggy Scalycap, Velvet Shank and some huge Southern Brackets. 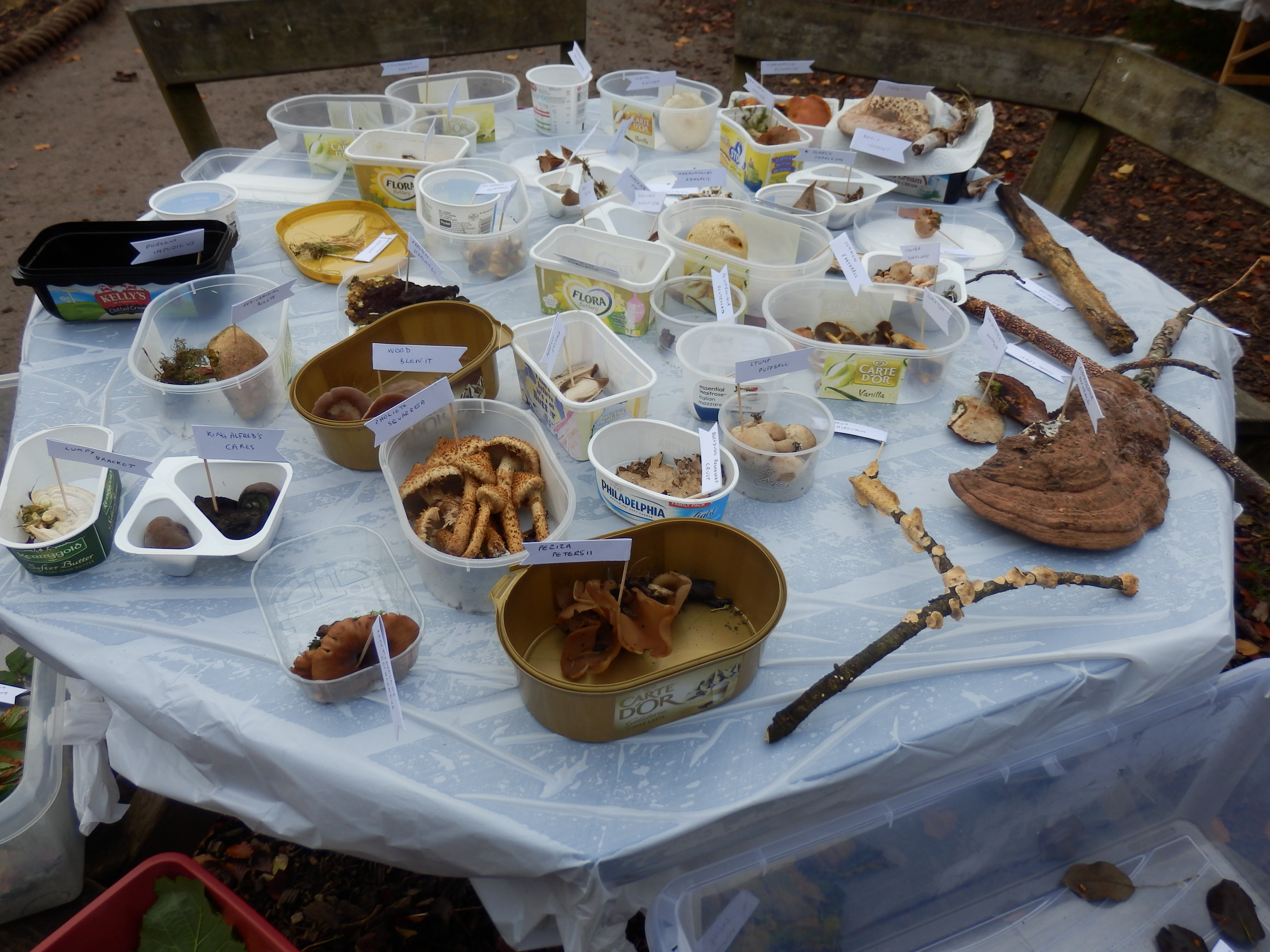 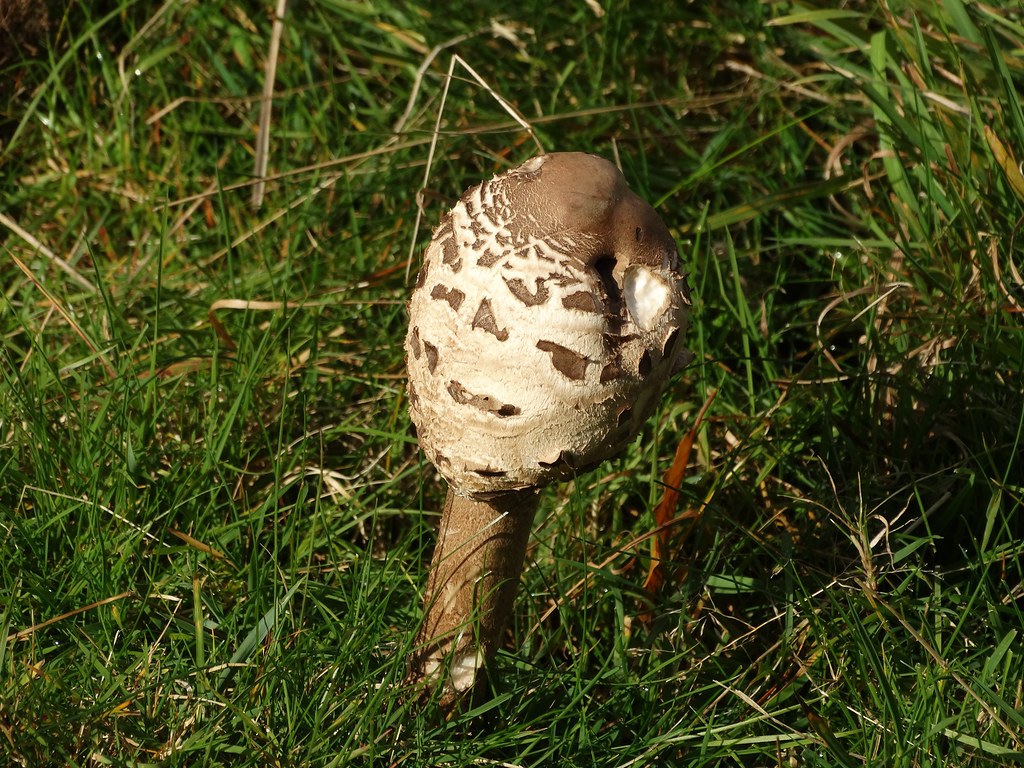 Nine of us gathered for this meeting in overcast but otherwise bright, dry and calm conditions. We were in for something of a fungal treat, with over 50 species being recorded in the morning, including several notable finds in this mixed woodland with many sweet chestnut trees in abundant fruit and featuring in the risk assessment. Almost immediately, just outside the entrance of the wood, our way was brightened by a shiny outgrowth of Golden Scalycap (Pholiota aurivella) from an ash tree, shortly to be followed by the blackness of a troop of Dead Man’s Fingers (Xylaria polymorpha). Then, once within the wood itself, a diverse array of variously shaped and coloured fungi presented themselves for our inspection, making our progress slow but rewarding. Some of the more notable finds included a stout specimen of Freckled Brittlegill (Russula illota) whose strong smell of bitter almonds could be detected several metres away; a delicate (and poisonous) toadstool of Green Dapperling (Lepiota grangei); a delightful group of Sinuous Chanterelles (Pseudocraterellus undulatus); a ghostly outcrop of Jelly Tooth (Pseudohydnum gelatinosum) and some well camouflaged Beige Coral (Clavulinopsis umbrinella). More common fungi, like Sulphur Tuft were also abundant. In addition to the fungi, we also noted a few ferns (including Narrow Buckler Fern, Dryopteris carthusiana, identified by Helena Crouch) and bryophytes (of which the beautiful Tamarisk-moss, Thuidium tamariscinum, was especially abundant). Two hours passed by extremely rapidly, and before we knew it, it was time to return to our cars. Clearly this woodland is very biodiverse, and would repay future visits at this time of year.

Randall and Alan Rayner
Photographs (By Suk Trippier):-Rob
Posted by steve curtis at 8:31:00 pm No comments:

Spotted an otter feeding between Churchill bridge and the pedestrian bridge at the back of the bus station at 0945 on 29/10/16. It was totally unfazed by me watching. It was swimming between the two bridges coming up with a fish every few minutes and eating it. Sadly I had a train to catch so only watched it for 20 minutes.

On a bright morning 13 of us gathered with the day’s intention to improve our knowledge of fungi in waterside habitats as well as enjoy the bird life of Chew Valley Lake. Our first impression was that the recent dry weather did not bode well for finding many fungi, but as we searched the woodland around the car park, Alan R quickly found a group of red-capped agarics, which he identified as Redlead Roundheads (Leratiomyces ceres). ing.  This once rare fungus had read the book which says that it is increasing in frequency and is often found on piles of wood chips around car parks.  We also found Grey Inkcap (Coprinopsis cinerea) fruiting prolifically at all stages of maturity, and a mass of the slime mould Fuligo septica, looking like a mass of ash and soot as well as a beautiful array of Spectacular Rustgill (Gymnopilus junonius).
Moving from the Car Park we walked to the bittern trail confirming that indeed this was not a good season for fungi but looking at a section of reeds cut by the water company we found numerous small, greenish yellow fruit bodies of Hypholoma ericaeoides which was found elsewhere on the lake last year by Alan F. It is said to be uncommon but since for much of the year the sites where it occurs are underwater it is perhaps not often looked for. On the pathway to the Bittern Trail we crossed a stream and observed a water rail on the mud which then entered the reeds just before we got close to it. Finally at the Bittern Trail Alan F explained why the willow carr habitat we were in was so special and that we had last year recorded many bryophytes there living on the horizontal branches of the collapsed willows.  These rotten trunks and stems were found now to be entertaining some large fruitings of Common Inkcap (Coprinopsis atramentaria – not to be consumed with alcohol!) and Sulphur Tuft (Hypholoma fasciculare). Meanwhile we heard several Cettis’s Warblers shouting their song at us from the willows that they inhabit (Alan F explained that for some reason these birds have different number of tail feathers to all other birds). Searching for the rare Alder Bolete (Gyrodon lividus) found previously proved fruitless, perhaps because we were too late (last year they fruited in September), but we did find fine a beautiful Beefsteak fungus (Fistulina hepatica) and a fine group of Dead Man’s Fingers (Xylaria polymorpha).
Lunch in the fit-full sun back at the car park was followed  by a visit first to Heron’s Green where we all had good views of a water rail (Alan F explained that a large proportion of the Water Rails ringed in the UK was by bird ringers at the lake). Meanwhile a Great White Egret flew in and proceeded to imitate a statue in the distance.
Moving on to Herriot’s Bridge, we had an excellent view of a Kingfisher which obligingly hovered for a while like a humming bird. Alan F then led the party through one of the net lines adjacent to the bridge where we saw two ‘jelly fungi’, Tripe Fungus (Auricularia mesenterica) and Leafy Brain (Tremella foliacea). This part of the lakeside was clearly eutrophic as the plant growth was lush and there were a lot of nettles and the reeds were 3m tall. Back then to the bridge for 15:30 after a very varied visit illustrating that there is still a lot to be learnt about this ‘Ramsar’ site (wetland of international importance).

Photos thanks to John Garrett
Posted by steve curtis at 11:15:00 am No comments: