A group of sixteen of us gathered under the magnificent veteran oak trees outside East Woodlands Church on a morning that began coolly but became increasingly warm and sunny towards lunchtime. We had a real fungal treat awaiting us!

We began by examining the undersides of some of the oak tree leaves, where several specimens of the spider, Paidiscura pallens, were present, along with their extraordinary spiky white egg cases. Emerging from the ground beneath the oak trees were fruit bodies of a variety of fungi that form ectomycorrhizal partnerships with the tree roots. These included a Death Cap (Amanita phalloides), unfortunately decapitated by recent grass-mowing, numerous Scaly Earthballs (Scleroderma verrucosum), a White Saddle (Helvella crispa), some Xerocomus cisalpinus boletes, Rosy Brittlegill (Russula rosea; formerly known as R.lepida) and Sepia Brittlegill (Russula sororia). A bracket of Beefsteak Fungus (Fistulina hepatica) was also present on one of the trees.

Thus alerted to the possibility of fungal abundance, we made our way quite rapidly along the byway towards the beech-wooded Roddenbury Hill, stopping briefly to examine specimens of Russet Toughshank (Collybia dryophila), Clustered Toughshank (Collybia confluens), Brown Rollrim (Paxillus involutus) and Redlead Roundhead (Leratiomyces ceres). At the base of the hill we examined some strong growths of Bank Haircap moss (Polytrichastrum formosum) and Rob Randall showed us some low-spreading plants of the bramble, Rubus arrhenii, with its sour-flavoured fruits. This species is confined in Britain to the Greensand on the Somerset/Wilts border and the peat moors at Shapwick and Catcott. But from then on, the fungi stole the show. Climbing uphill we soon came across a fine group of Chanterelles (Cantharellus cibarius), which were quickly followed by a large number and variety of other species including Ceps (Boletus edulis), Amethyst Deceivers (Laccaria amethystina), Beechwood Sickeners (Russula nobilis, formerly R. mairei), Ochre Brittlegills (Russula ochroleuca), Grey-spotted Amanita (Amanita excelsa) and the uncommon Dappled Webcap (Cortinarius bolaris).

As if that wasn’t enough, having rounded Roddenbury Hill, we decided to take the path downwards into the very different wet woodland habitat of Lower Woods. Here we came across two large outcrops of perhaps our most exciting find of the day, a deep pink jelly fungus called Salmon Salad (Guepinia helvelloides). But that was not all. Further downhill, under pine trees, we encountered a group of Saffron Milkcaps (Lactarius deliciosus), then, in wet oak and birch woodland we came across some magnificent Scarlet Brittlegills (Russula pseudointegra) along with several other uncommon and beautiful fungi, as well as the slime mould Tubifera ferruginea. A return visit
beckons…


Russula pseudointegra
Posted by steve curtis at 7:24:00 pm No comments:

Just four of us gathered for this meeting on a damp but by no means impossibly wet morning. After slowly climbing up the short, steep hillside from North Road, we entered the deep dark woodland along the skyline path beside Bathampton Warren and enjoyed the abundance of shade-loving plants growing there, which included a head-high outburst of Scaly Male-fern (Dryopteris affinis)  as well as a variety of common bryophytes. Amongst several wood-inhabiting fungi present were some groups of Dead Man’s Fingers (Xylaria polymorpha) and a pair of Velvet Shields (Pluteus umbrosus). Emerging out of the woodland into calcareous grassland we stopped to inspect and identify the numerous lichens and bryophytes growing at a convenient height on an overhanging tree branch. Close examination of an ant-mound near the TV masts revealed a few shoots of the uncommon Rose-moss (Rhodobryum roseum) which is characteristic of this habitat. Walking across the grassland towards Bathampton Wood, we enjoyed the fine displays of numerous Woolly Thistles (Cirsium eriophorum)  in full flower, even though these lacked the abundance of attendant bees and butterflies that would have been present in sunnier conditions. On the golf course, we came across a pile of sawdust on which troops of Grey Ink-caps (Coprinopsis cinerea) were fruiting, surrounded by cut logs inhabited by several bracket and crust fungi including the uncommon Splitgill (Schizophyllum commune). Descending the hillside back towards Sham Castle we came across a fine patch of species-rich grassland with abundant Small Scabious (Scabiosa columbaria) and Spiny Restharrow (Ononis spinosa), and at the top of the clearance just below the folly were some fine plants of Great Mullein (Verbascum Thapsus).  Overall this was an enjoyable multi-interest circular walk with excellent views. 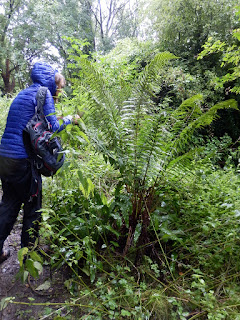 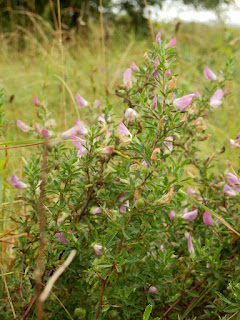