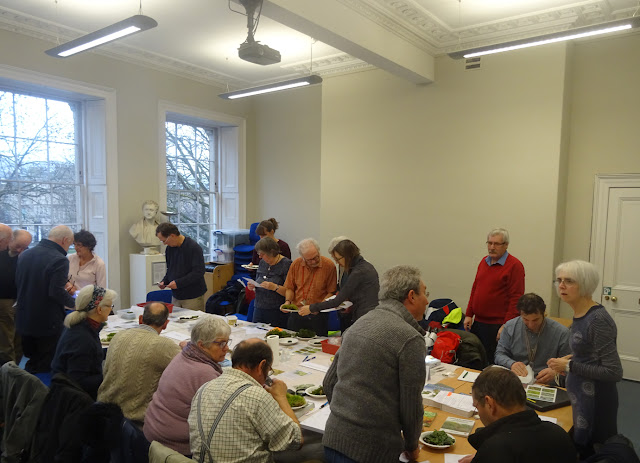 The fossil cast of the dinosaur Rhomaleosaurus cramptoni provided an interesting backdrop and contrast of scale as we set up for our workshop on ‘Bryophyte Ecology’ which was attended by 20 Bath Nats members and visitors.
For this workshop we started with the premise that different habitats can (to some extent) be home to predictable suites of moss and liverwort species and that this can help greatly when learning to identify these intriguing plants. So we had set out mini study stations representing 7 common local habitats such as trees, mortared walls, dry stone walls, limestone grassland, woodland banks, soil and tarmac. Each habitat station was equipped with species descriptions, photographs and of course fresh material of the key species for each habitat. Armed with LED hand lenses everyone was invited to have a go at identifying the species for one habitat before moving on to another.
Many mosses and liverworts were examined, from huge clumps of Rambling Tail Moss (Anomodon viticulosus) found on dry stone walls, to small leafy liverworts such as Dilated Scalewort (Frullania dilatata) on tree bark.
As expected the ‘big two’ ubiquitous species Common Feather-moss (Kindbergia praelonga) and Rough-stalked Feather-moss (Brachythecium rutabulum) proved tricky to recognise but examination of tiny details with a hand lens helped separate these confusing species. The gemmae cups of thallose liverworts on soil provided some interesting insights into vegetative reproduction in liverworts.
Two hours passed very quickly as intense and sociable study ensued, and hopefully most people will now be able to identify Springy Turf-moss (Rhytidiadelphus squarrosus) and Pointed Spear-moss (Calliergonella cuspidata) in their lawns.