Leader Lucy Delve
Ten members and one non-member joined me at 10am in Ham Wall RSPB car park and we promptly headed towards Noah’s Hide, Shapwick Heath where the adult Osprey was located, for, possibly, the 11th or 12th consecutive year. It is commonly referred to as “The Bank Holiday Bird”.  Some believe it to be a female; the bird is un-ringed. We stopped a few times along the footpath to look as Great White and Little Egret, Grey Heron, Gadwall and Wigeon, also a number of dragonflies including Migrant Hawker and Ruddy and Common Darters. 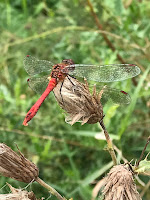 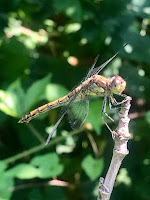 The forecast was for rain from around midday so it we looked at these insects I the sunshine while it lasted.The Osprey was on the short tree stump where I viewed it in August 2018. It had caught a fish about an hour ago so was unlikely to fish again for at least another hour. We had sustained excellent views of the bird through telescopes with much preening of feathers and occasional glances around giving us lovely views of the facial markings. A female Marsh Harrier put in an appearance but did not seem to bother the wildfowl present which included Greylag Geese, Great Crested Grebe, Gadwall, Mallard and a few Tufted Duck. There were plenty of Mute Swan and Black-headed Gulls.  As the wind increased and the clouds rolled in, a party of migrating Sand Martin dropped in, progressively flying lower over the distant reed bed and feeding on low-flying insects.
We had an early lunch back in the shelter at Ham Wall and met up with three members including our President, who had unfortunately been delayed. The rain came, as predicted, but thankfully it was only short-lived, and we set off to the first viewing platform where staff and volunteers were cutting and burning reed, as they do at this time of year. We walked on to the second platform and found more egrets and wildfowl and a few Lapwing, sadly no Wood Sandpipers. Swallows dashed by as we watched another female Marsh Harrier drift leisurely over the reeds.
On the way back to the car park, we diverted to the Tor View Hide and had close views of Little Grebe and heard a Water Rail call several times.  Parties of small birds were on the move through the reed bed including Long-tailed Tits, Willow Warblers and Chiffchaffs. Cetti’s Warblers are not that vocal now, a few uttered some sub-song, a more subdued version of the normal blast of loud notes. By now it was raining quite hard, although thankfully the rain eased as we walked back to the car park at around 3pm.
Lucy
Posted by steve curtis at 9:39:00 am