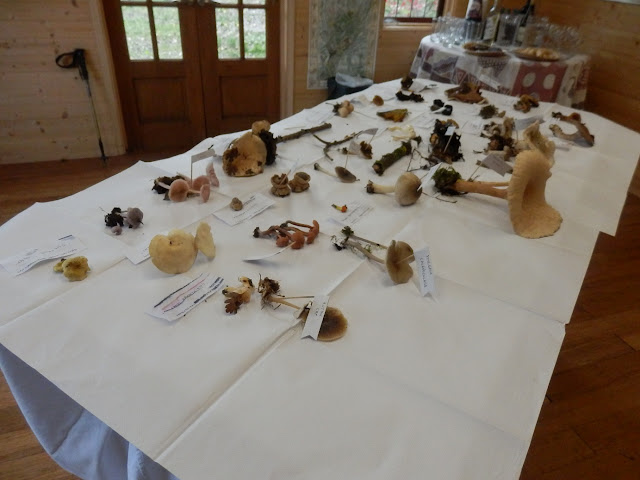 On a bright but slightly overcast morning of Wednesday 30th October a group of around 18 members plus several visitors gathered in the classroom at Friary, Hinton Charterhouse, by kind invitation of Penny and Richard Williamson, and were treated first of all to coffee and biscuits while examining a display of diverse fungi that I had collected the previous Monday from local woodlands. We then walked up the steep narrow lane from Friary towards the A36, flanked by wooded banks, to see what we could find. We found quite a lot! The first special find was a cluster of Poplar Fieldcaps (Agrocybe cylindracea) growing from the base of a large sycamore tree. Next were an unusually large number – perhaps as many as 30 - of Collared Earth Stars (Geastrum triplex). Near the top of the lane we found some strikingly bright yellow Sulphur Knights (Tricholoma sulphureum) and along the way there we encountered Ivory Woodwax (Hygrophorus eburneus), Pearly Parachutes (Marasmius wynnei) and Inky Mushroom (Agaricus moelleri). As in 2018 their were also plentiful tiny agarics of the seldom recorded Beech Petiole Parachute (Marasmius setosus) and Beechleaf  Bonnet (Mycena capillaris) respectively inhabiting the petioles/midribs and laminae of beech leaves.

After a delightful lunch of quiches or pork stew, fresh vegetables and  potatoes, followed by cake, we walked along the public path steeply uphill into the western part of Friary Wood. Here, we found an arc of very large Trooping Funnels (Clitocybe geotropa) and a superb specimen of Magpie Inkcap (Coprinopsis picacea) – perhaps our ‘star fungus’ of the day. We then walked to the eastern part of Friary Wood, where we encountered numerous Lilac Fibrecaps (Inocybe geophylla var. lilacina) and some beautifully formed White Spindles (Clavaria fragilis) and Crested Coral (Clavulina coralloides).  It had been another rich and very enjoyable Friary Fungi day!
Alan Rayner
Photographs
Display Table (Marion Rayner)
Trooping Funnels (Marion Rayner)
Magpie Inkcap (Richard Bottle)
Crested Coral (John Garrett)
Posted by steve curtis at 9:12:00 am No comments: